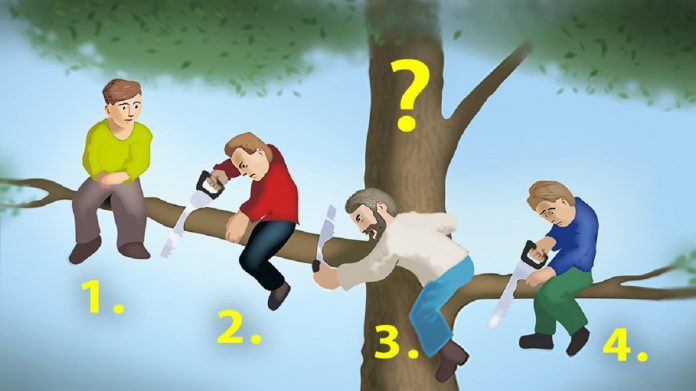 There is no right or wrong answer but the way you apply your logical thinking to this interesting situation will reveal the truth about your personality.

There are times when you come up with an idea or a decision but the people around you just do not share the same idea or logic as yours. Have you ever thought what the reason is?

Apparently, it all boils down to what kind of thinker you are. You may already have an idea about how you think and react but this puzzle will help you know more about yourself!

In this puzzle, all you need to do is to compare each person, where they sit and what they do in the situation.

Note that their facial expression also helps you to identify which one of them is the dumbest.

Once you have decided, scroll down below to see what it tells you as a person.

Answer 1: Person 1 is the dumbest

Obviously, in this puzzle, the one who is the closest to the tree trunk, Person 3, is the safest one, hence, the smartest. He has the advantage to cut the branch off where the other people are sitting on.

Unlike Person 3, Person 1 and Person 4 are the ones that are the furthest away from the tree trunk. So, they have the unsafest position and apparently, dumber than everyone else in the puzzle.

However, which one of them is dumber?

While Person 4 appears to be under stress while sawing the branch off, Person 1 seems calm and oblivious to the fact that he will fall soon. If you think that person 1 is the dumbest, you are a believer of facts and logic as science proves. You also believe that we can reshape our future to achieve whatever outcome we desire.

You may think that old and traditional institutions as dogmatic and sometimes, superstitious.

Answer 2: Person 3 is the dumbest

Person 3 may be safe from falling off the trunk but that does not mean he will be safe from any consequences of his action in the future.

Unlike Person 1 and Person 4, Person 3 deliberately harms others and as we already know, what goes around comes around so Person 3 will still be punished for his action later on.

If you gravitate towards this answer, you have high moral standards and believe that traditional institutions and conventional ideas have better outcomes than newer discoveries and perspectives. You believe that caution is needed when making the so-called ‘progress’.