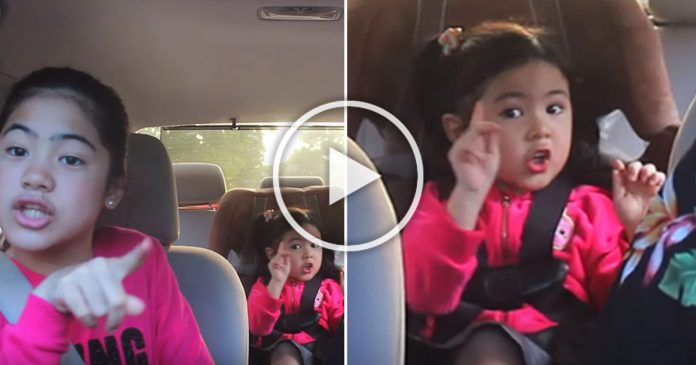 12-year-old Niana Guerrero along with her 22-year-old brother, Ranz Kyle are two of the rising YouTube stars in the Philippines with seven million followers on their social media account.

The two siblings first gained the public’s attention thanks to their highly entertaining vlogs, pranks, and challenges. Recently, the spotlight was again on them after their new dance video went viral on the internet.

In their latest dance video, Ranz can be seen driving while Niana sits next to him in the passenger seat, lip-syncing to Korean girl group BlackPink’s popular single, “Kill This Love”.

While Niana shows her perfect lip-syncing and enthusiastic dance, it is their younger sibling at the back of the car that has won over the internet’s heart!

Little Natalia, their younger sister who sits in her car seat at the back shows off her diva moves and even sings and dance passionately along with her elder siblings.

She may be young but Natalia has certainly got the moves!

Her adorable dance has received much attention from the internet as many fell in love with Natalia’s attempt at dancing and singing to the song.

Ranz who is focusing on his driving seems to be confused by his sisters’ karaoke session but he later joins in and the three even dance in sync together.

The video has since been viewed over 10 million times on YouTube alone and has attracted 23,893 comments since it was posted on April 27.

Ranz who is a famous YouTube star regularly posts videos on his YouTube channel featuring his sisters dancing to popular songs.

Some of their best hit videos are where Niana and him dancing to songs like “Despacito” and “Shape of You” which has received 41 million and 9.6 million views respectively.

Watch the three siblings do an impromptu karaoke session in this video here.