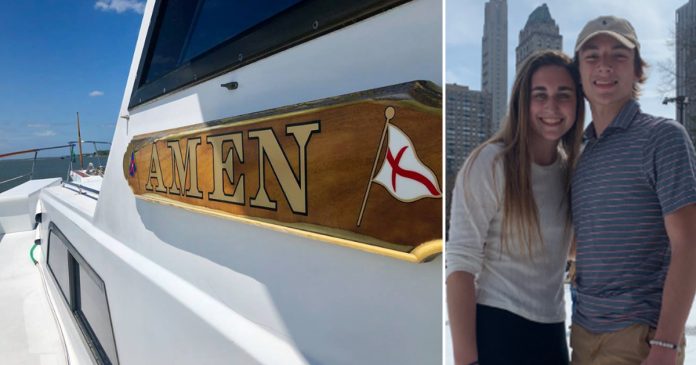 When we find ourselves in a terrifying situation and help seems to be far away, sometimes all we can ever do is to pray and hope for a miracle to happen. That was what these two girls did when they thought their lives were coming to an end.

Tyler Smith and Heather Brown who are both 17 years old decided to celebrate Senior Skip Day by going to the beach for a swim on April 18, as reported by CBS News.

Tyler, Heather along with some of their classmates went to Vilano Beach. While swimming offshore the beach, the two saw an island and decided to swim towards it.

As they were swimming towards the island, they went for a red buoy a few dozen yards away.

Unfortunately, it was only then that the teenagers realized the distance seemed to grow larger than they thought.

Then, Tyler suggested to Heather to aim towards a nearby lighthouse, the St. Augustine Lighthouse, as it appeared nearer to the coastline compared to their initial plan of swimming to the island.

However, the lighthouse, too, seemed further away than they thought it would be. At that point, both of them were starting to get exhausted.

“We started to realize we were getting further away from the lighthouse rather than getting closer,” Tyler told CBS News. “That’s when we started to freak out.”

“This current pushed us so far we couldn’t do it,” Heather added. “At that point, we knew were in trouble.”

Heather started to fear that they could not make it to the shore. “If we kept swimming, we would have drowned,” she said.

That was when the two started to pray earnestly for someone to rescue them.

“When we linked arms, honestly cried out to God, ‘If you’re out there, please send something to save us,'” Tyler said.

Thankfully, it appeared that their prayers were answered straight away. Just half an hour later, a boat which was en route from Florida to New Jersey saw them in the middle of the sea.

“It came out of nowhere,” Heather said. “When I saw it, I knew we were getting out of here.”

The crew of the boat quickly rescued the two friends and gave them blankets to warm up.

A moment later, the captain, Captain Eric Wagner told them that the boat’s name is “Amen”.

To them, they truly felt that the boat and the crew were a godsend. “There’s no other reason, no other explanation in the world other than God,” Tyler said.

Grade 7 student who can barely see anything gains admiration from...