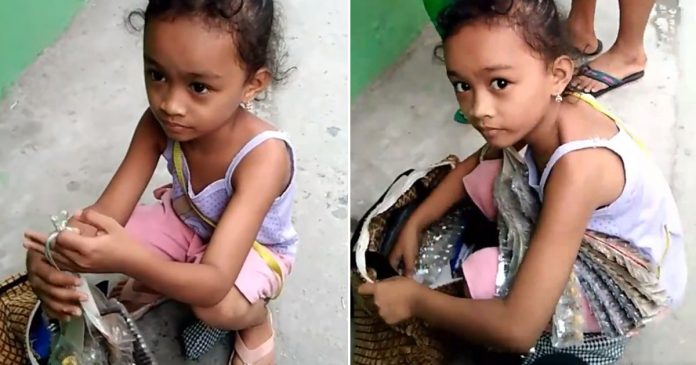 “The youth is the hope of the motherland.” That was what one of the national heroes of the Philippines said of the younger generation.

He strongly believed that the youths will be a great asset to the country if they get the education they deserve.

Despite the fact that most parents share the same hope for their children, not everyone is privileged enough to send their children to school as in the case of this 7-year-old girl.

While her peers learn new things at school, this Filipino girl has no choice but to help her poor family by selling peppers and other products on the streets.

The poor girl’s story was shared by Facebook user Joepring Galicia Sales when he saw her trying to earn a living all by herself on a busy street.

In the post, Joepring took his chance to ask the girl about her family, where she lives and why she is selling when she should be going to school.

In their conversation later on, the 7-year-old girl told him that she is a third-grader, her mother was at home doing laundry while her father was at work.

Her story broke Joepring’s heart as the young girl should enjoy her childhood studying at school or playing with her friends instead of laboring away on the streets.

According to the country’s Republic Act No. 7658, all children aged below 15 years old are prohibited from being employed in both public or private undertakings.

Unfortunately, the sight of young children having to start working at an early age to support their family is not uncommon in the Philippines.

Poor parents often have no other options but to send their children to work instead of school.

It may not be an ideal situation but they have no choice.

After the girl’s story went viral on social media, many netizens shared their sympathy for the young girl.

If you happen to see the poor girl and other unprivileged young children on the streets selling something to support their family, why not support them by buying their products. That is the least we could do to help ease their burden.