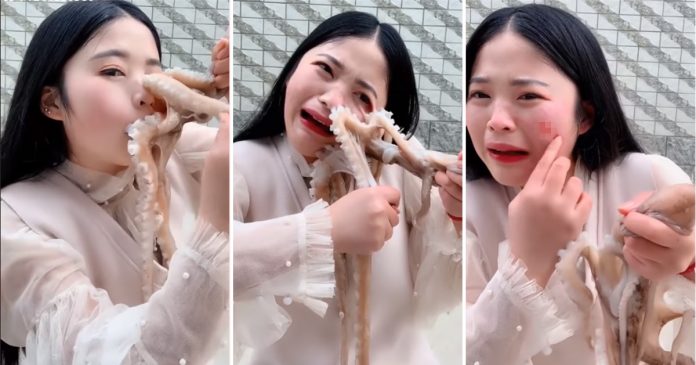 What could possibly go wrong if you decided to eat a live octopus? Well, for this Chinese vlogger, apparently everything!

In a live-streaming video by a vlogger from China, one aggressive octopus decided to teach her a lesson when it stuck all of its eight tentacles to her face.

The Chinese vlogger who is known as “seaside girl Little Seven” shared a 50-second video of her desperately trying to pull the octopus’ tentacles from her skin.

The short video which quickly went viral on video platform Kuaishou shows the octopus uses its 280 suckers on each tentacle to defend itself from being eaten alive.

In the beginning of the video, the vlogger appeared to be calm before attempting to eat the live octopus. “Look how hard it’s sucking,” she said.

Unfortunately, she later realised that things had gone south when the octopus stuck itself a little bit stronger than expected when she tried to remove it from her skin.

Eventually, the octopus gave up and let its tentacles off the vlogger’s skin.

However, after almost a minute battling with the octopus, the vlogger seemed to no longer keen on eating the seafood. She then informed her viewers that she would “eat it in the next video”.

Nevertheless, her relief did not last long as soon as she noticed a tiny wound on her cheek where the octopus sucked earlier!

“My face is disfigured,” she complained.

While another viewer commented, “An eye for an eye, a tooth for a tooth.”

Well, it seems that the vlogger gets what she wants. In her previous live-streaming video, she was heard saying “Why have none of my clips ended up on the trending topics chart?”

Viral footage of elderly man as he carefully gears up his...