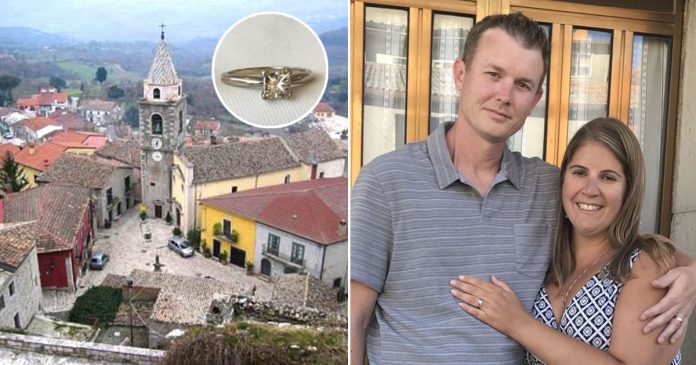 In a surprising event, New Jersey couple found their engagement ring in the same exact location where they lost it during a vacation in Italy nine years ago.

It is common to see anything precious that we accidentally lose in a public place will never be recovered again.

So, when this couple lost their engagement ring during their vacation, they never expected to see the ring again nine years later!

Justin and Margaret Mussel were visiting San Marco dei Cavoti, Italy in summer 2018 where Margaret’s family owns a home in the region.

The couple had gone to Pompeii earlier that day before Margaret realized that she lost her engagement ring during the trip.

“Earlier that day we had visited Pompeii and it was extremely hot,” Justin told the Asbury Park Press. “My wife’s ring was loose, but she didn’t realize it was gone until later.”

Margaret explained to Daily Mail that the 1.1 karat princess-cut ring was already loose before it went missing.

At first, they thought that the ring would be somewhere in Margaret’s family home but after a thorough search, they assumed that the ring must have slipped when they visited Pompeii.

Unfortunately, Justin’s rental insurance did not cover the loss because the ring went missing in a foreign country.

They were just sitting on a bench in the front yard when something sparkly caught Justin’s attention.

“I saw this flicker of light coming out of a crack in the sidewalk,” Justin said.

With the help of a screwdriver, Justin recovered the object from the crack and to his surprise, it was the same ring that Margaret lost nine years ago!

“The odds of it falling into this crack, much less finding it nine years later, are astronomical,” Justin said. Meanwhile, Margaret was skeptical at first when Justin told him that he found her ring in the crack.

“The band is a little scuffed up, but not too bad. The diamond looks good. If you saw it, you wouldn’t think it was in a crack for nine years,” Margaret said, adding that the ring still fit.