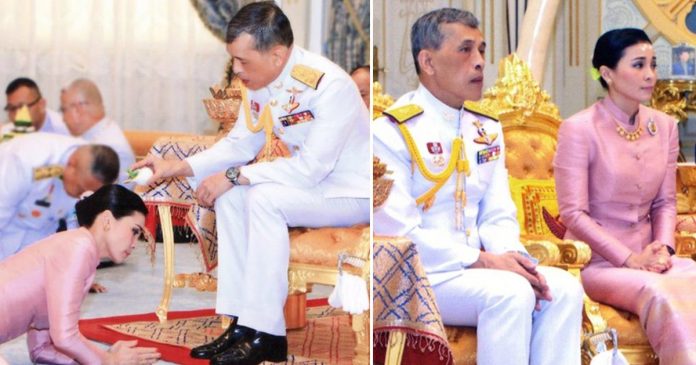 According to CBS News, Queen Suthida who is formerly known as Suthida Vajiralongkorn Na Ayudhya had previously worked as a flight attendant for Thai Airways International before she met King Vajiralongkorn on a flight.

The new queen then entered the palace as the palace guard in 2013 and became the commander of the security unit for King Vajiralongkorn.

Queen Suthida was then made a full general in the Royal Thai army in December 2016.

In 2017, she became the deputy commander of the king’s personal guard, as reported by Reuters.

Even though the relationship between the two has been in the limelight for about three years, little information has since been revealed to the public about Queen Suthida.

Her marriage to King Vajiralongkorn ahead of his official coronation on Saturday allowed the investiture of her as Queen Suthida.

Footage of their wedding ceremony was later shown on the nightly Royal News segment on all Thai television channels.

In the footage, Queen Suthida can be seen prostrating herself before the king and presented a tray of flowers and joss sticks.

The king and queen later signed a marriage certificate book which was also signed by the king’s sister, Princess Sirindhorn, and Privy Council head Prem Tinsulanonda as witnesses.

The king has previously been married and divorced three times before his marriage to Queen Suthida. He has seven children.

King Maha Vajiralongkorn, 66, ascended to the throne after the death of his father, King Bhumibol Adulyadej, in October 2016. The late king reigned the country for 70 years.

Watch the video below for more of the royal wedding ceremony