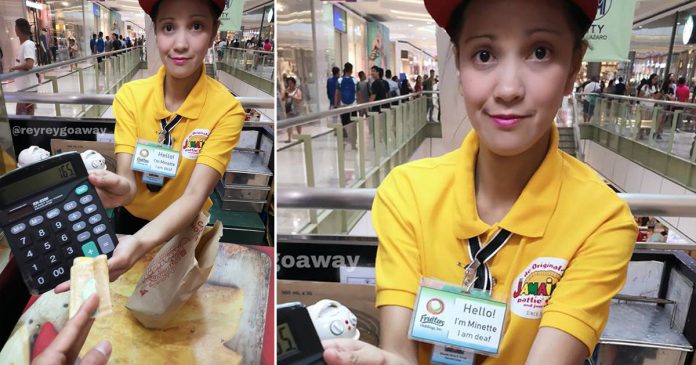 Everyone should have the right to apply for a job but people with disabilities are often at a disadvantage when it comes to getting hired.

Thankfully, there is now an increasing awareness among companies and employers as more and more companies take part to hire people with disabilities as their employees including De Original Jamaican Pattie Shop.

Facebook user Rey-an Moreno shared the photo of an employee, Minette, at a De Original Jamaican Pattie Shop branch who has a hearing disability.

In his post, Moreno expressed his admiration to the company by giving a chance to their employees who have a disability to come work for them. He also encouraged the public to give support to companies who take initiatives to hire people with disabilities.

“Guys, let’s support companies that hire deaf people as their employees so more companies will hire them,” Monero wrote.

In the photo, an employee with a hearing disability can be seen smiling to the camera as she raises a calculator to Monero which shows the total price of his purchase.

“You’ll see ID that says “hello I’m (name) I’m deaf”. This is from “De Original Jamaican Pattie Shop (cheese pinatubo) and Fruitas“. I bought at Farron Cafe before because they hire deaf people too. They give the sweetest smile too!” Monero continued.

It is certainly both an eye-opening and inspiring story as Monero’s post quickly made rounds on social media as many people with disabilities felt inspired by his post.

Guys, let's support companies that hire deaf people as their employees so more companies will hire them. You'll see ID…

One user wrote, “I’m a deaf person too. I deeply appreciate this kind of acts at least we felt that we’re still belong to the society. Kudos to those people who has patience and understand their situation. Like me.”

Other users also expressed their hope for more companies to provide opportunities to people with disabilities just like Minette in the photo.

Monero’s post actually shows that people with disabilities are just like normal people and they could adapt to the fast-changing world as good as us, if not better. All they need is more opportunities!