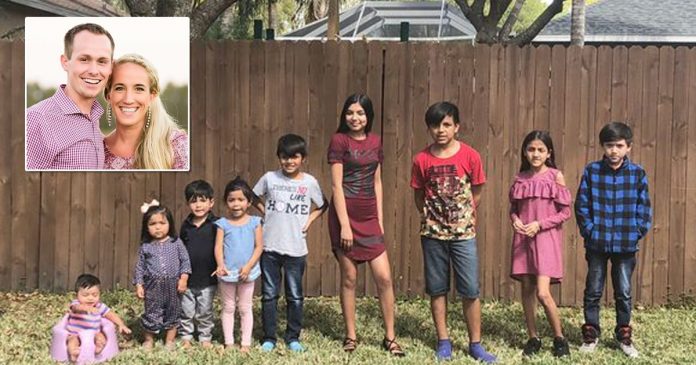 Florida-based couple Peggy Smith and her husband, Jacob had no children to call their own until Jacob saw a post on Facebook about nine siblings who needed to be adopted. In just a short span of time, the couple went from childless to having nine children.

It began when Jacob saw a post on Facebook about a plea to help the siblings. However, he did not want to break the family up by separating the children.

That was when he decided to join forces with his parents, Thad and Loryn to help him adopt and raise and the siblings, all nine of them.

“I saw a group of siblings that needed adopting on Facebook. I mentioned that I would love to be able to help and my mum called to ask if I was serious about it.

“She suggested we take the younger ones and they adopt the older ones to keep them all together. It’s just crazy that it all came from a Facebook post.”

In an interview with The Mirror, Peggy said, “We do know this is probably the hardest thing we will ever do. We thought it was crazy, but we thought why not? Why not this family?

“We have a home. Why not grow our family this way?”

The news may come as a bold action by the couple but Loryn said there is a rationale behind her son’s decision.

“Our response is, there is no doubt we are crazy but we have parented 15 children full time and fostered over 100 children through our years as foster parents.

“We feel it boils down to if not us, then who?

She also added that the adoption also allowed the siblings to stay together as a family.

“We received a card from our 10-year old soon-to-be daughter, in it she wrote ‘Thank you for letting us be in your home, you saved us from being separated’.”

The big family is now working with the Promise Love Foundation to raise money to buy two cars for their convenience.