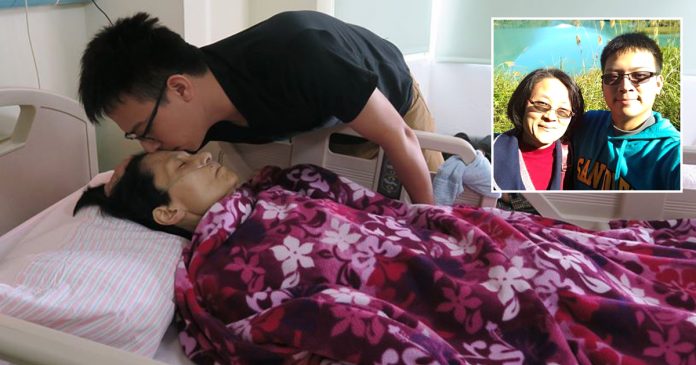 Liu Xinhong is only 20 years old but he is no stranger to the hospital’s ward where his ill mother is getting treated for her parotid cancer.

A year ago, his life was completely different as he had just begun his first year of university in Yulin County, Taiwan.

However, when he learned that his mother’s cancer had spread to most parts of her body around mid last year, Liu Xinhong did what he thought was the best to do at the time.

Liu Xinhong then dropped out of university and started to take care of his sick mother at the hospital full time.

According to him, he could further his studies anytime but his mother would not get to live for a long time.

“I only have one mother, but with my studies, I can go back to them later,” he said.

He is now a regular presence at the hospital’s Peace Ward where his mother stays for the treatment.

To Liu Xinhong, he never regrets his choice to defer his studies for a while to take care of his mother and he has a solid reason for that.

“Mom has put a lot of time and effort into raising me. She’s helped me with homework and lots of other things, but I haven’t spent much time with her. This could be our last Mother’s Day together,” he said. His eyes were brimming with tears.

“Thank you mom for bringing me into this world and for the endless love that you’ve given me.”

“Now, my mom needs caring for and as her son, I have the full responsibility of taking on this role. Everyone must face death one day. It’s unavoidable,” he wrote on his Facebook.

“I think companionship is very important during a person’s last days. Facing the inevitable result, I would like to learn to discard regret and say goodbye to my loved ones and bless them; isn’t it better than just being sad?”

As a devoted son, Liu Xinhong never forgets to pray for his mother, asking those above to ease her pain every day without fail.

In spite of the unfortunate situation he is in, Liu Xinhong is blessed to have other family members who have been supportive of him. Liu Xinhong’s younger brother joins him after school.

While his father is pretty much tied up running their shop and cannot visit the hospital much, he is thankful to have a son like Liu Xinhong who always displays his filial affection to him and his wife.

“Son, I’m always proud of you,” his father said.