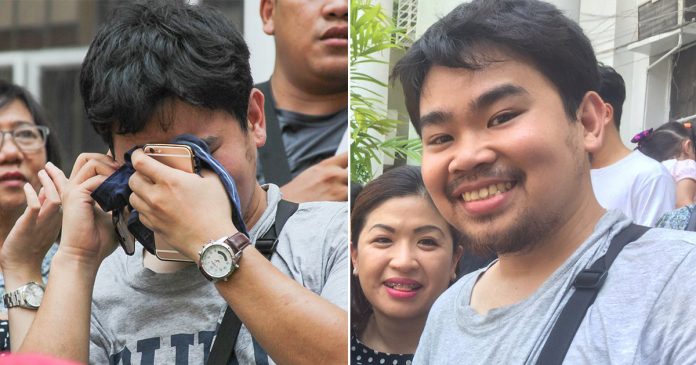 When Neil Genzola graduated from a nursing course in 2009, he never expected it would be hard to find a job in a hospital. 4 years later, he decided to turn his life around.

“10 years ago, I had a hard time finding work in a hospital. It was in 2013 that I decided to enter law school. It was fruitful,” Neil said.

A former nursing graduate, Neil struggled for a while as he had a tough time finding a nursing job after he graduated. Neil then started working in a call center.

However, Neil knew that it was never impossible for him to live a better life so he later decided to study law in 2013.

He paid for his studies at Arellano University with the money he saved up from working at a call center for 10 years.

Becoming a lawyer then became his new goal but according to him, studying law was never easy and that he did not expect he would pass.

Neil Genzola (right) is among this year’s bar passers. He is with fellow Arellano law students. Neil took up nursing but had difficulty finding work in a hospital. He’s been working in a call center for 10 years and hopes to work in government as a lawyer. @ABSCBNNews pic.twitter.com/T3X7OofcrZ

In 2018, he took bar exam which saw 8,155 examinees taking the same exam, hoping to pass the bar like Neil.

“The exam was very difficult. And they said the passing rate was already low. It was so hard. You’ll really doubt yourself,” he said.

Luckily, Neil’s prayers were answered and he was among the top 22 per cent who passed the 2018 bar exam.

“I am thankful to the Lord for granting my wish to pass the bar,” Neil said.

When asked about his next plan to work as a lawyer, Neil said that he wished to work for the government.

“I hope to be part of government to be able to help people. I want to join the Public Attorneys Office or the Office of the Solicitor General,” he said.