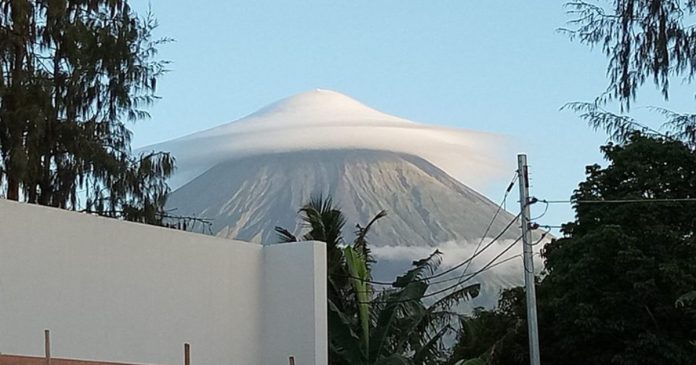 The Mayon volcano in the Philippines is admired around the world for being the most perfectly formed volcano. Thousands visit Luzon island every year to witness Mount Mayon’s beauty, which is shrouded in myth and mystery.

One passerby happened to witness a peculiar cloud formation over the mystical volcano, which has since gone viral.

Noli Luna photographed a unique ‘umbrella’ looking cloud which formed above Mayon at around 5.30 am on April 23. He then shared the stunning sight on Facebook.

As the cloud faded so quickly, not many were able to witness the strange Mayon umbrella cloud first-hand. Instead, thousands of netizens expressed their admiration for the magical moment.

Noli’s stunning photo has been shared over 30,000 times so far.

“Well it is a good sign, that our country will become prosperous, peaceful, deliverance, joyful, bountiful in so many ways.

“It’s about time Philippines will rise up better than before,” one person commented.

Another passerby said he was lucky enough to witness the special moment.

“We were driving to Manila, we commented how beautiful it was,” he posted.

mayon volcano is so shy and is hiding behind the clouds for so long but look at this beaut pic.twitter.com/0rSmX0DzVG

A netizen reposted the image on Twitter with the caption, “Mayon volcano wearing her white umbrella…isn’t it beautiful and astonishing?”

The strange phenomena is apparently called a “lenticular cloud,” according to a GMA News Online report.

The stationary, lens-shaped “clouds” form at high altitudes, and can appear singular or stacked like pancakes, according to AccuWeather.

They form when air passes over mountains, cooling just enough for condensation to occur.

RT myth_vs_facts: This is what a Lenticular cloud over Mount Fuji looks like. pic.twitter.com/GsjdKDv2mc

They have often been mistaken for UFOs in the past because of their smooth and round structure.

The day the aliens visited #Dublin

Spectacular lenticular cloud that literally got everybody to take their phones out. pic.twitter.com/Oz3UXjydL2

The wonderful sight above the Mayon volcano just adds to its mystical appeal. It was formed due to a tragic love story, according to local folklore. The volcano formed from the burial grounds of lovers Magayon and Pangaronon, according to the myth.

Were you lucky enough to be able to see the umbrella cloud formation above Mount Mayon?