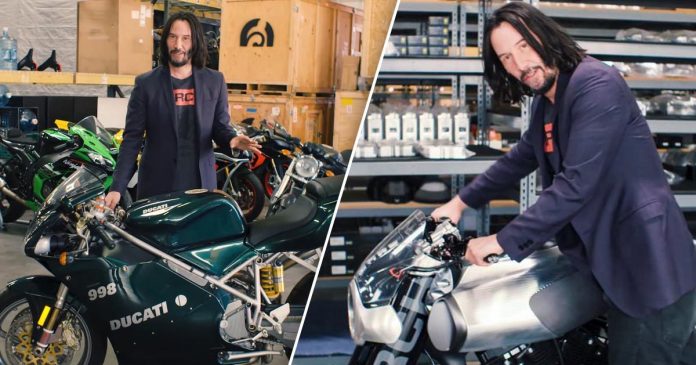 Most of you probably know Keanu Reeves for his roles in hit movies such as the Matrix, John Wick and Speed.

But the Hollywood actor has caught everyone’s attention recently for a very different reason.

In a new video shot for GQ, the 54-year-old let them into his garage so he could showcase his impressive collection of bikes while discussing his very own company, the L.A. custom chopper shop Arch Motorcycle.

He is a total motorcycle enthusiast and has collected a wide variety of unique bikes throughout the years.

One of the bikes he shows is actually from Matrix Reloaded itself, and it’s one of his favorites!

The bike was made green by Ducatti because it was for a Matrix film, Keanu said.

He goes on to explain how he first fell in love with the vehicles when “a young woman” first taught him to ride while he was shooting a film abroad back in 1986.

After all these years, he still loves the motorcycles as much as he did when he first bought them back in the day.

“It’s got a nice sound. It smells good when it heats up the oil. And I got a lot of miles on that motorcycle,” he said.

If you’ve ever considered buying a motorcycle of your own, Keanu has some invaluable advice for you:

“Be comfortable on it, don’t get too much power that can overwhelm you too quickly, and, uh, have fun,” he said.

We’ll take his word for it!

Watch Keanu Reeves showing off his most prized motorcycles in the video below:

What do you think of his collection?

Wheelchair dancer on ‘France’s Got Talent’ falls to floor—but his last...