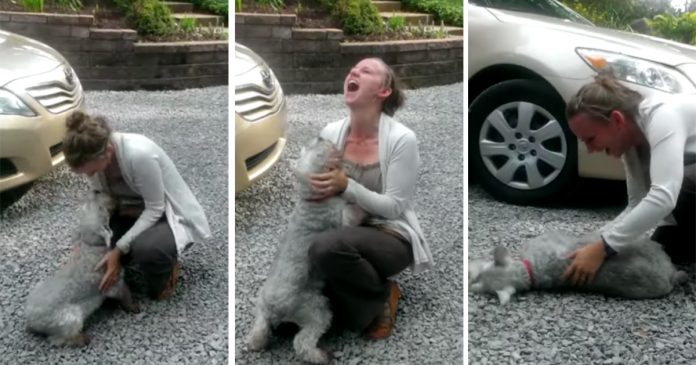 Pure happiness. That is exactly what we see when this schnauzer named Casey met its owner after so long! But the excitement might be a little too much for the dog as it collapsed during the happy reunion!

Two years ago, Rebecca Ehalt from Pennsylvania had to move overseas to Slovenia for work and made an extremely hard decision to leave her 9-year-old dog, Casey behind. Believe that Casey would be most comfortable to be with the familiar people that love it, Ehalt left her beloved dog to her family.

While it’s just two years for us human, Casey has actually been missing its owner for fourteen years in dog years! That is a very long time! But everything is worth the wait for Casey when Ehalt finally returned to Murrysville, Pennsylvania after two years to attend the wedding reception that her parents planned for her and her husband.

Casey and Ehalt finally get to meet each other.

Ehalt can finally reunite with the dog that she misses so badly, but it turns out that Casey misses her even more. The video recorded by Ehalt’s family, Casey excitedly jumped on Ehalt as soon as it saw her wagging its tail, wanting to give her kisses and squealed in happiness.

However, the excitement has taken its toll on Casey and the dog suddenly collapsed on the ground and appeared to pass out during this joyful reunion!

Worried about Casey’s condition, the pooch was later taken to a veterinarian who watched the video for a check-up and luckily the doctor said that Casey was fine! We bet Casey probably was just thrilled to see its owner after so much time apart.

The dog was just too happy to meet her!

Ehalt’s sister Rachel Abbett said that she knew Casey misses her owner so much, but really had no idea that the happy reunion would affect the dog to the point of passing out!

“I think the video really says it,” Abbett told TODAY.com.

Casey and Ehalt have definitely been sharing a deep love!