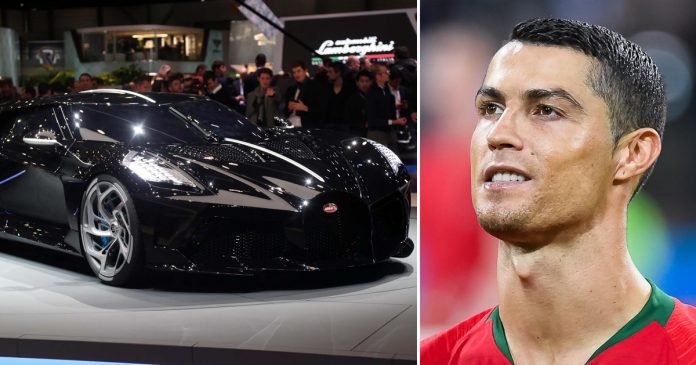 He was reported to purchase an $18 million Bugatti La Voiture Noire which is believed to be the most expensive car ever built.

The car was designed after the Bugatti Type 57 SC Atlantic of which only four were made between 1936 and 1938.

It was first presented to the world at the Geneva Motor World Show 2019.

Even though Bugatti refused to confirm whether or not Ronaldo has purchased the car, Spanish sports Daily Marca reported that the football player is the new owner of the car.

However, the Spanish newspapers revealed that the actual buyer was Ronaldo.

Cristiano Ronaldo has reportedly bought the most expensive car ever, Bugatti La Voiture Noire [$12m]. There's only one model of this car and it finally seems to have an owner. He can drive it from 2021. pic.twitter.com/3fqkeUGJZB

It was not the first time Ronaldo was reported to purchase an expensive car.

The legendary footballer is known to have a taste for luxury cars.

Some of the cars he owns are Mercedes C Class Sport Coupe, a Rolls-Royce Phantom, a Ujn Ferrari 599 GTO, a Lamborghini Aventador LP700-4, an Aston Martin DB9, a McLaren MP4 12C and a Bentley Continental GTC Speed.

Nevertheless, his taste for expensive cars will never burn a hole in his pocket as he makes about $6 million weekly.

This one-off Bugatti La Voiture Noire is the most expensive new car ever sold at a base price of $12.5M and holds its value at $18M. Total output of 1500HP, I would say that it is a fast pieces of modern art combined with some beautiful history from the mid 1930’s. @Bugatti pic.twitter.com/onlO6jxNAg

However, he will not be able to drive the car until 2021 as Bugatti still needs to finalize some small details on the prototype.

The French luxury car company has only built one Bugatti La Voiture Noire as a tribute to their 110th anniversary.