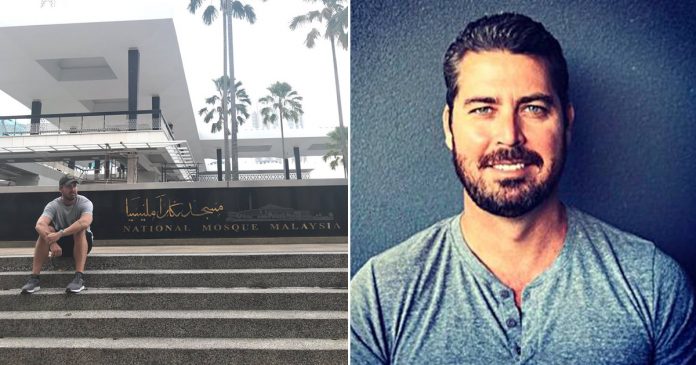 When American columnist, CJ Werleman was told by his daughter that she had lost her only debit card and was left with no cash at Kuala Lumpur International Airport (KLIA) during her 12-hour layover, he and his wife tried their best to figure out ways to help her.

Being thousands of miles away and other challenges proved to be quite a tough situation for them to help their daughter out.

The Australian-born author and journalist recently shared on Twitter how his 18-year-old daughter was caught in an unfortunate circumstance in which his daughter lost her debit card while waiting for her next flight.

Ok, so my 18 year old daughter is at Kuala Lumpur airport terminal – waiting for her connecting flight to see me.

She has a 12 hour lay over, but moments ago she lost her only debit card, so has no money for a meal or drink.

But then this kind Muslim man came along…. pic.twitter.com/VgOvKJBtAg

Werleman wrote how he and his wife were trying to figure out how they could wire funds to their daughter but all the transfer methods would take either at least two days or that they do not accept Australian bank cards.

My wife and I have spent past couple hours figuring out how to wire her some funds, so she have dinner and be comfortable etc.

But then came along this angel ?

Thankfully, a kind-hearted Malaysian man and his family then came to lend help to the distressed girl in an unexpectedly heartwarming incident.

The elderly man and his family noticed that she looked distressed while sitting at a coffee table that they kept asking if something bad had happened to her.

When they learned that she had lost her only debit card and was left with no cash during the long layover, the family quickly came to her rescue.

They generously gave the girl two bars of chocolate, grapes, a bottle of water and RM50 (US$ 12) to spend.

Following the update on his Twitter, Werleman shared that his daughter slept in her sarong at the airport before flying off to see him.

His daughter now has safely arrived  in Australia and he expressed his gratitude to “the dozens of Malaysians who offered to bring her a meal.”

My daughter is a-ok! She slept on her sarong at KL airport. She's now back in the air, and I get her in apx 1 hour from now.

But from the bottom of my heart, thank you so much for your comments and the dozens of Malaysians who offered to bring her a meal.

The American-based author also shared how he was impressed by the Malaysian government upon his “first return visit to Malaysia in five years.”

First return visit to Malaysia in 5 years. Encouraged by how well the government is managing and providing care for Rohingya Muslim refugees, especially given a new wave of boats are on their way here.

I have a piece coming out on this within the next week. pic.twitter.com/PfdRpmSBat