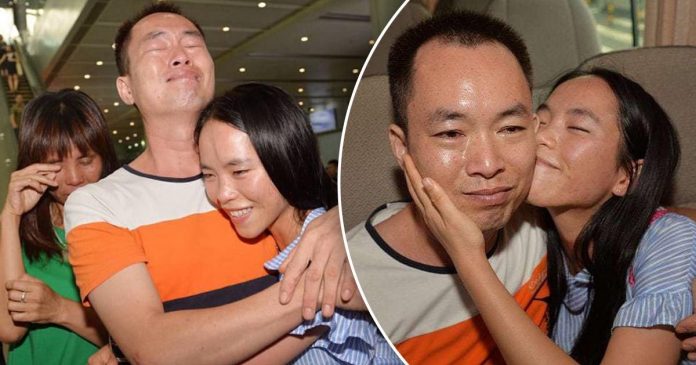 14 years ago, Kylee Bowers was accidentally separated from her biological parents in China and later lived a new life in Chicago. She was finally reunited with her birth family 13 years later.

It began in May 2005 when Kylee who was then known as Liang Jinglang moved to Shunde district in the city of Foshan with her biological father, Liang Hua from their hometown in Leizhou, Guangdong province.

The two moved to Shunde as her father worked in the district.

However, his workers’ dormitory did not allow the then 5-year-old Kylee to stay with him.

So, Liang Hua asked for a favor from his brother who was living in a nearby city of Zhongshan to take care of his daughter, as reported by The Paper.

Kylee later quickly became homesick and made an attempt to return to her hometown in Leizhou on May 20th. Unfortunately, the little girl became lost until she was found by a concerned old woman and took her to the police station.

However, young Kylee could not understand the officers there as she only spoke her hometown’s dialect.

Later, the officers sent Kylee to the Zhongshan Children’s Welfare Institute and gave her a new name, Zhong Fengmin. Kylee stayed there for two years before she transferred to a foster home.

In 2012, an American couple adopted Kylee and brought her to Chicago where she then began a new life.

Back in China, Kylee’s father, Liang Hua was desperately searching for his little girl. For seven years, he and his wife wholeheartedly searched for Kylee and went from town to town to look for her.

His search finally came to an end when Kylee, who was 18 years old began to search for her biological parents with the help from her adoptive parents.

Kylee then posted on the website of the volunteer group Baobei Huijia about how she had gone missing 14 years ago.

Thankfully, Liang Hua saw her post and reached out to her on WeChat. After several questions of which one of them involved about Kylee dislocated her shoulder after falling off a stage in front of her old home, both of them realized that they are family.

“You are my father,” Kylee replied to Liang Hua as she burst into tears after he asked her the questions.

It did not take long for them to arrange a DNA test to confirm that Kylee is indeed Liang Hua’s daughter.

After 13 years of searching, Liang Hua was finally reunited with Kylee at the Guangzhou Baiyun International Airport on July 1, 2018.

Their heartwarming reunion did not only move Kylee and her birth family but also her adoptive parents. “I’m very happy for Kylee. She always wanted to find her family. I told her it’s good. To have two families that love you from two different countries, you can’t do better than that,” Kylee’s adoptive mother said.

Last fall, Kylee began her studies at the University of Illinois at Urbana-Champaign. She also has a plan to study abroad at a university in China.

A man thought a little girl was pulling a prank on...

“A perfect role model for me is my dad” Son shares...