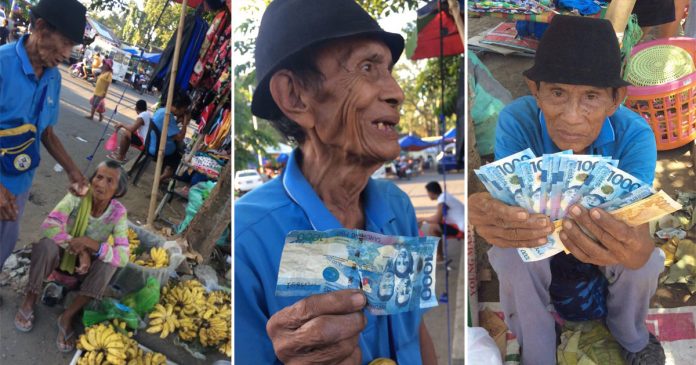 All fruit vendor Solomon Alfanta wanted to do was to earn an honest living by selling fruits at the New Market Place in Cebu City. Unfortunately, not everyone was as honest as him.

As usual, Alfanta set up his stall at the market to sell fruits. That day, he was looking forward to selling as many as bananas he could before he called it a day.

Not long after he set up his stall, an unknown man approached his stall and ‘bought’ PHP100 (USD1.92) worth of bananas which the man then ‘paid’ with a PHP1,000 bill.

At the time, the 76-year-old fruit vendor did not expect anything unusual and resumed his business after the man left.

Later that day, he went to buy some meat using the PHP1,000 bill he received from the unknown customer.

However, he was later told that the bill was fake.

Imagine Alfanta’s feelings when he finally realized that he was conned by a stranger.

“My wife wanted to go home already. We planned to buy P200 worth of meat and use it to cook humba at home but the vendor did not accept the P1,000. I decided to just leave the chopped meat,” Alfanta said.

Luckily for Alfanta, a concerned resident of Sibunga, Cebu later took to social media to share his story and it was only a matter of time before the post went viral.

“I went to the market early. Lolo was paid with a fake P1,000 bill. He gave P900 change since the scammer bought P100-worth of bananas. The bananas were left behind and the scammer walked away afterwards,” wrote Angelie Mabanta who posted the what happened to Alfanta on Facebook.

Mabanta also went live on Facebook and plead for help from the public to offer donations to Alfanta. “Many extended their help. I did not expect that many people will be touched with the post and situation of Alfanta,” Mabanta added.

Thanks to the viral post, Alfanta received monetary donations raised by Mabanta and from Overseas Filipino Workers from the USA.