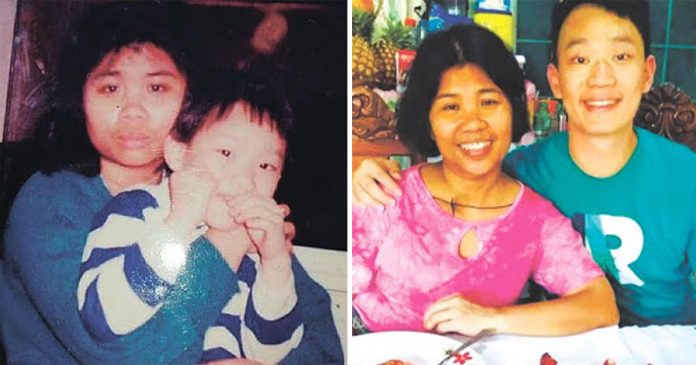 When Philip Tse found out that his Filipino former nanny who took care of him for 19 years was diagnosed with ovarian cancer, he immediately flew to the Philippines to take care of her.

His former nanny whose name is Remelyn Zubiaga Yumul went to Yanchai Hospital in Tsuen Wan, Hong Kong for a checkup after a persistent stomach pain.

To Remelyn surprise, what she thought was just a minor pain later led to a ward admission as the doctor wanted to evaluate her condition further.

Unfortunately, they discovered that Remelyn had Stage 4 ovarian cancer and it has already spread to her lungs and appendix.

Thankfully, her job as a domestic helper in Hong Kong entitled her medical care in the country as long as she was employed. However, Remelyn later decided to return to the Philippines to seek for treatment.

Luckily, her current employer was more than understanding to give her vacation leave and two months’ salary for Remelyn to pay for her treatment.

Back in her hometown, Remelyn went to Capiz Doctors Hospital in Roxas City to receive treatment. She underwent surgery last March 13 and has begun her chemotherapy on April 22.

Remelyn who is 54 years old worked for the Tse family where she took care of Philip when he was still a baby.

She then continued to work for his family for 19 more years before she worked for another employer.

In spite of no longer working for the Tse family, Remelyn still keeps in touch with them especially Philip who she took care of when she worked there.

When he learned about Remelyn’s condition, it did not take long for Philip to fly to the Philippines to visit her. For Philip, he wanted to repay for Remelyn’s kindness for taking care of him when he was younger even if just taking care of her for a few days.

Philip who is now 31 years old spent 4 days in Roxas City to take care of Remelyn.

Obviously, Remelyn was moved when she knew Philip’s intention. It was a happy moment that she would always treasure in her heart.