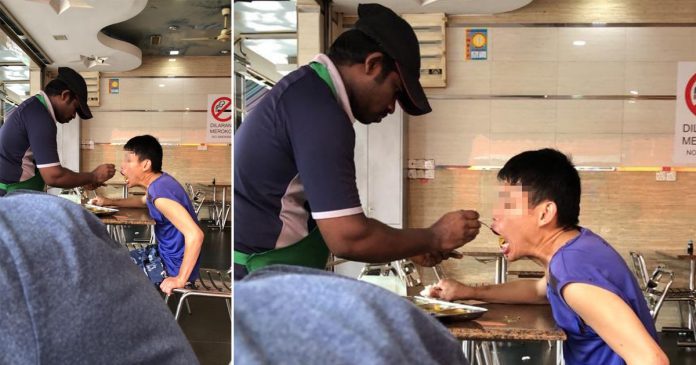 A Malaysian restaurant worker touched everyone’s heart after a heartwarming photo of him feeding a customer who appears to have difficulty doing it himself.

The photo which was posted on Twitter on April 22 shows the restaurant worker patiently feeds the customer after he sets the plate on the table.

While he could have just left after serving the food and resumed his duties, the kind-hearted restaurant worker chose to stay to help feed his customer instead. It was certainly a scene that is not usually seen in many eateries and that was what won the hearts of the internet.

After user @najib_fiqri posted the touching photo to Twitter, the photo quickly made rounds on social media as it immediately amassed more than 28,000 retweets and 19,000 likes.

“It is so touching to see another being called “mamak” to feed a disabled person. I really respect him.”

Mamak is a friendly term used by locals to identify workers in Muslim Indian restaurants throughout the country.

According to him, the photo was taken by his friend, Muhammad Syahmi Kamarol Zaman who went to the restaurant earlier this week when he saw the customer sat at a table next to him and his friends.

At the time, the customer was alone before the concerned restaurant worker approached him and decided to feed him.

In an interview with mStar, Muhammad Syahmi admitted that he was moved by the kind gesture shown by the worker as he witnessed him spending 20 minutes to feed the customer.

Following the photo going viral on the internet, another user, @naqiuddinamia, came forward and revealed that the restaurant worker has actually been working in the restaurant for five years and has always displayed his generous and charitable side to his customers.

“The mamak’s name is Imran for those of you who want to know. He may seem arrogant but he’s actually a very kind-hearted person. He’s been working at SA Maju for five years and his service has always been great. His teh tarik rarely disappoints people,” he wrote.

It is incredibly heartwarming to see that there are kind-hearted and caring people like this restaurant worker when they see people who are less fortunate. We definitely need more people like Imran.