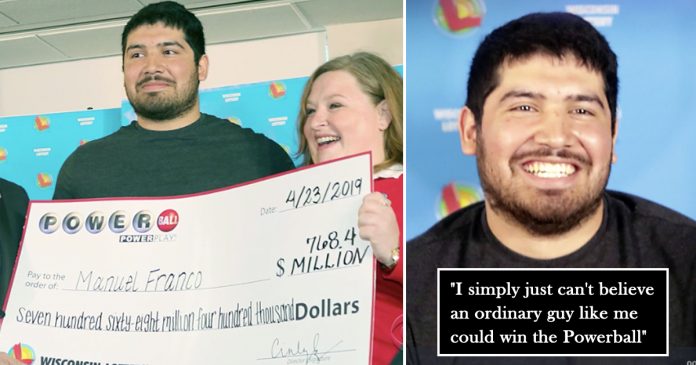 A 24-year-old man from Wisconsin on Tuesday won the nation’s third largest Powerball jackpot worth a staggering $768 million—and he says he was feeling particularly lucky the day he bought his winning tickets!

Manuel Franco, who spent $10 on tickets, almost didn’t check the winning one after the March 27 drawing, as it was stuck behind another ticket.

And when he finally began to match the numbers to the Powerball, he was overcome by his emotions. He couldn’t believe it!

“I was going insane. I looked back at the three other numbers, they all matched,” Manuel said.

Manuel told reporters he quit his job almost immediately after winning, and added that he couldn’t continue.

But he didn’t reveal much about his previous line of work or about himself. Legally, he was not able to remain anonymous.

What on earth will Manuel be doing with $768 million? He says he wants to do good with some of the money and give some money to charity.

But he also knows where to draw the line if people start to get pushy.

“I’m ready and I know how to say no,” Manuel said.

Manuel bought the winning ticket at a Speedway gas station in the Milwaukee suburb of New Berlin. The winning numbers were 16, 20, 37, 44 and 62.

The $768 million prize will be paid over 29 years, or rather, winners can choose a $477 million cash prize.

The Milwaukee gas station is also in for a treat too, as it gets $100,000 just for selling the winning ticket!

The huge cash prize comes third behind a $1.6 billion Powerball jackpot in January 2016, which was shared by three winners in Florida, California and Tennessee.

It seems like Manuel is going to need a bit of time to let the news sink in!

“I’m not sure what the next chapter is gonna bring for my life, but I have been setting up the best legal team,” he said in a news conference.

“I simply just can’t believe an ordinary guy like me could win the Powerball,” he added.