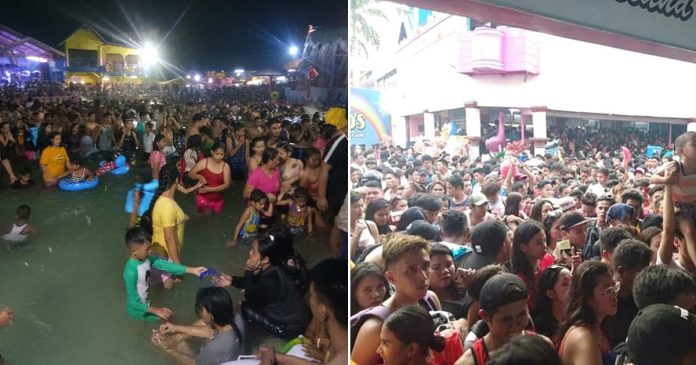 Easter break which took place last weekend saw thousands of people taking the chance to go on a family vacation at resorts and in popular tourist spots.

It seemed that hotel pools, beaches and water theme parks became the crowd’s favorite as the heatwave continued to hit many countries across the world.

However, would you still continue with your vacation plan when you find out that the pool of the hotel you will be staying is overcrowded?

One netizen shared how unbelievably overcrowded a resort in Bulacan, Philippines last weekend.

With 11 swimming pools, it is not a surprise that the resort received a huge influx of visitors who were eager to cool down in the hot weather.

Photos shared by Jemar Breezy John Usi on Facebook shows how overcrowded the swimming pools are that people have to fight for a spot to stand, not swimming.

There is barely little space for the visitors to stand in the pools, let alone to swim!

When the photos went viral on social media, many netizens criticized the resort for receiving visitors beyond their capacity.

However, some netizens commented that the management would not want to make their customers unhappy by turning them away.

If you were to find out that the resort you were staying was this crowded, would you continue to stay?

Even if you did not mind sharing or probably, fighting for space to stand in the overcrowded swimming pool, it may not be best to do so.

This is because the pool may contain liters of urine.

According to a three-week study done by the University of Alberta, Canada, the researchers found the two public swimming pools they tested to contain 75 and 30 liters of urine respectively.

When the urine mixed with the chlorine in the swimming pools, it can further aggravate health issues to humans such as skin irritation.

Components like urea and ammonia typically react with disinfectant used in the pools and later form a by-product called trichloramine.

Trichloramine can be irritating to the eyes and lungs.

If you ever wonder how did you get a pink eye after swimming in a public swimming pool, this is how you got it in the first place.

In some cases in which there is prolonged contact with this chemical, it can lead to asthma as commonly seen in professional swimmers and pool workers.

Hence, you might want to find a less crowded resort or just forget your plan to cool down in a public pool if you do not want to risk having skin irritation or pink eye after returning from the vacation.