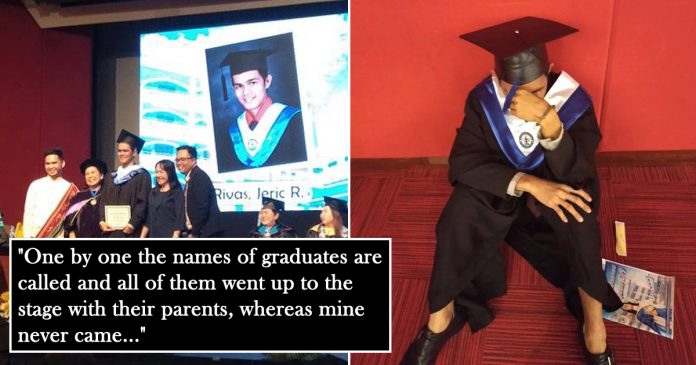 Graduation day may be the proudest day for a student but for Jeric R. Rivas, it has always been the day when his heart breaks the most.

Jeric who recently graduated with a Bachelor of Science in Criminology degree shared a bittersweet story on his Facebook account on how heartbroken he was as his parents never attended his graduation day.

In his Facebook post, Jeric wrote details that his parents were never there for him on his biggest day since elementary school until he graduated from college.

“When I was in elementary school, I received the highest honor as the best student but my parents never came,” Jeric wrote.

“They were supposed to go on stage and tie a medal around my neck but since they didn’t come, I refused the medal.”

After he finished high school, Jeric left his hometown of Sibuyan Island in Romblon before he furthers his bachelor degree at the top La Concepcion College in San Jose Del Monte, Bulacan.

Jeric’s journey to graduating from college was far from easy as he had to work multiple jobs to pay for his tuition fees. So far, he had worked at a factory in Quezon, as a fast food service crew and even a housemaid.

However, he hopes for only two things; to graduate top of his class and to see his parents’ proud face when he walked on the stage to receive his scroll.

While he did manage to graduate top of his class, his other wish did not come true as his parents did not attend his graduation ceremony. That broke his heart as he tried to fight his tears when he walked up the stage to receive his Bachelor scroll.

Nevertheless, Jeric was thankful that his professors were so supportive of him when they accompanied him on stage when his name was called.

“One by one the names of graduates are called and all of them went up to the stage with their parents, whereas mine never came. When my name was called, however, my professors came to my seat and accompanied me up to the stage,” Jeric wrote.

“As I walked up, one of my other professors were standing there on stage waiting for me and embraced me with a hug. At that moment, some of my sadness disappeared but I still cried in front of everyone,” he added.

Jeric ended his post by expressing his gratitude to his professors and those who have helped him throughout his college journey.

He also wrote how he hoped that he has made his parents proud even despite the rejections and sorrows he went through.

“To my parents, who up until today could not accept me in their life, if you’re reading this, this is me now and I hope I made you proud…”