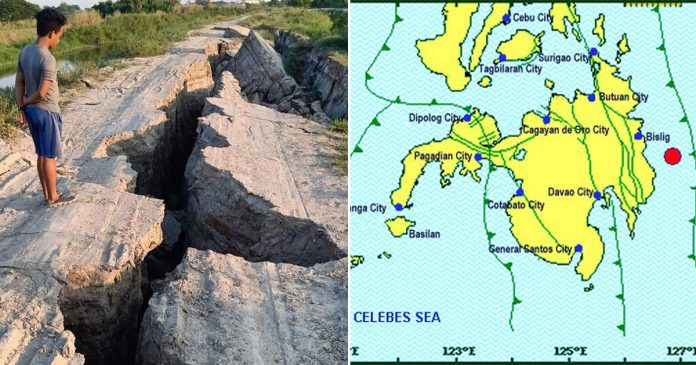 Davao Oriental has been rocked by a much weaker earthquake than previously this week, according to reports.

The magnitude 4.7 earthquake hit the region from beneath the sea at 11.43 am local time on Wednesday.

NH | Ateneans vacate buildings inside the Jacinto campus after an earthquake was felt in Davao City. pic.twitter.com/JxfMHYS69K

The earthquake was not an aftershock from the tremor felt in Eastern Samar on Tuesday afternoon, according to the Philippine Institute of Volcanology and Seismology (PHIVOLCS).

Fortunately, no tsunami warnings have been advised.

The 4.7 magnitude earthquake follows a 6.1 quake which struck Zambales on Monday that killed at least 16 people, and a 6.5 in Visayas the following day which injured five.

Phivolcs research specialist Henry Peñarubia said there is “nothing irregular” about the quakes in Davao, according to ABS-CBN News.

Phivolcs also said it is not likely properties will be damaged from the quake, and aftershocks aren’t expected.

81 people were injured from the two major quakes which rattled the Philippines earlier this week, and 14 remain missing.

Multiple people were killed and dozens were trapped when the Chuzon Supermarket branch in Porac town collapsed, CNN Philippines reported.

Tremors were also strongly felt in Clark International Airport during the April 22 earthquake.

Security footage shows employees hiding under their desks as debris falls down from the quake.

Seven people were injured at the airport as part of the ceiling collapsed, Jaime Melo, president of the Clark International Airport Corporation said.

The first quake reportedly cause damage to around 29 structures and buildings, according to the Office of Civil Defense.

Mother of two shows just how much society’s preference for light-skin...