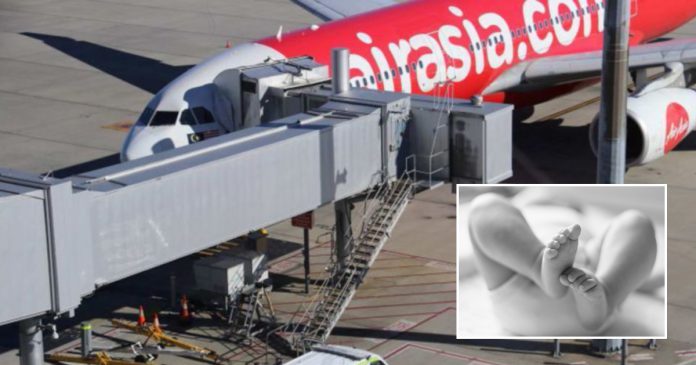 A devastated passenger aboard an AirAsia flight from Kuala Lumpur to Perth has described the tragic moment a stranger’s two-month-old baby died in her arms.

Nadia Parenzee, who was aboard the AirAsia flight D7236 yesterday morning said it was “the most confronting situation one could possibly go through” as she described the tragedy.

Passenger recounts 'how baby died in her arms' on Perth flight https://t.co/rfmQYk7RgA

When the baby started to cry non-stop, Nadia, a mom and former nurse, offered to help the parents, as she said the baby was “really restless”.

But she just assumed the baby cried because of getting hungry.

“I could see by looking at them that they were a little bit distressed, the baby was crying a lot, but then I could see the stewardess was giving a bottle to the baby, so I thought ‘OK, maybe it’s just hungry’,” Nadia explained.

Nadia was about to nap when she felt a member of the cabin crew give her  “a vigorous tap” on the shoulder.

When she saw the baby’s condition, she was extremely alarmed.

“I could see this look on the parents’ [faces]. They just sort of handed the baby to me,” Nadia said.

“I took the baby straight away and I could see that she was grey in colour and she was struggling to breathe, so I said a little prayer.”

She knew the baby didn’t have much time left, so she was just about to attempt CPR, before she urged cabin crew to make a medical call.

Nadia described the incident as chaotic when everyone realized there was something seriously wrong with the baby.

Doctors immediately began CPR and others frantically searched for the plane’s medical box.

But it was too late.

“I had known when I looked at the baby’s pupils and they did the light test that the baby had passed.”

Nadia asked the pilot if they could make an emergency landing, but the aircraft was two and a half hours away from Perth.

Doctors and Nadia kept trying to resuscitate her until they arrived to Perth International Airport, where medical teams were waiting on the tarmac.

The baby’s devastated family were on their way to Australia to “start a new life” Nadia said, and the baby was their first child.

Just last week, the baby had a cold and went to the doctor but the Saudi family never imagined something like this would happen.

“It’s very surreal. She was so tiny,” Nadia said.

“We are unable to comment further on the infant’s medical situation, however our thoughts are with the infant and family involved,” an AirAsia spokesman said in a statement.

Our thoughts are with the baby’s family at this difficult time.