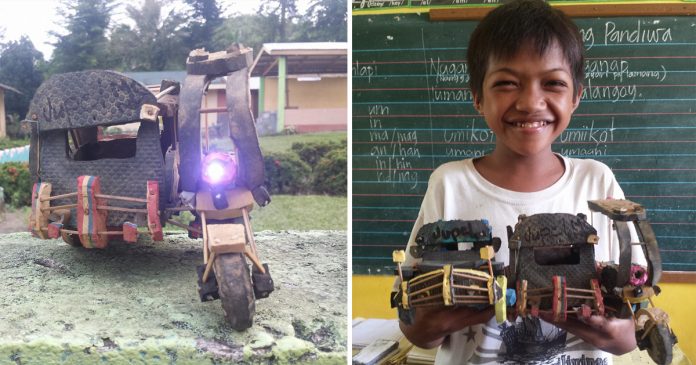 Being poor does not stop this schoolboy from the Philippines from being creative and making toys out of discarded rubber flip-flops.

According to the Facebook post written by Indigenous PH, the 13-year-old boy named Jupel Batobato goes to the Casillon Elementary School in Baco, Oriental Mindoro, the Philippines.

Jupel is also a member of the indigenous tribe, Mangyan, which lives in the mountainous areas of Mindoro.

Coming from an impoverished community where there is no electricity and secluded from the hustle and bustle of a big city, Jupel often has to endure with many difficulties including having to walk for 20 minutes from his house to school.

Because of the long distance and rugged trail, Jupel’s slippers would last for only a month or less.

As his family could not afford a new pair of slippers for him, the schoolboy had to walk barefoot to school.

Walking barefoot to school on a daily basis later inspired Jupel to dream of riding a vehicle like Jeepney or tricycle to his destination.

It seemed like a far-fetched dream for Jupel at first but he realised that he could turn it into reality with the old rubber slippers he found on his walk to school.

With his imagination and creativity, Jupel later brought the discarded rubber slippers he found back home and turned them into his dream cars, jeeps, and vans.

Sometimes, he puts flashlights and LED lamps to his toy vehicles.

After the Facebook post about Jupel’s toy cars went viral on social media, many users praised the boy’s effort and creativity for turning something that most people think useless into incredible toys.

“Talented kid. Wish you the best education and success in life kid. We need more kids like you in this world. Keep up the good work,” one user wrote.

Meanwhile, another user commented, “I sincerely think his artwork will be worth a lot in the future.:-).”

Even better, Jupel later made it to the talent show “Little Big Shots” for his unique talent.

Even though he initially made the toys after taking inspiration from his dream, Jupel apparently wanted to sell his toy vehicles not only to earn a living for himself but also to raise funds for his school, according to a Facebook post by Mindoro News.

Secretly requested to donate organs, 18-yo man saved 6 other lives...