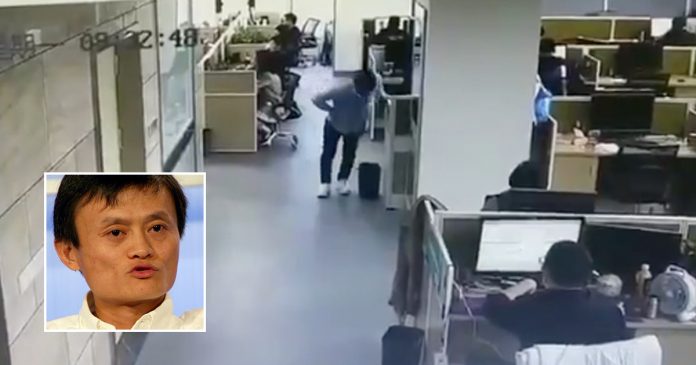 Shocking footage of an employee who appears to have collapsed from exhaustion has made the rounds on social media. It has sparked intense backlash over 12-hour, 6-day work weeks endorsed by Alibaba’s Jack Ma.

He looks extremely uncomfortable as he holds the edge of a table.

His colleagues seem to be completely unaware of his condition and continue with their work.

Suddenly, the male employee falls to the floor, and colleagues rush to his aid.

The video was also uploaded by a social media user on Twitter, captioned, “Everyone cherishes life, and another young man has fallen. It is recommended that 996 companies set up an emergency department.”

A “996” company is one which enforces a working model which requires employees to work from 9 a.m to 9 p.m., six days a week, according to Forbes.

Jack Ma, founder of e-commerce giant Alibaba (BABA), and one of China’s richest men, has recently praised the work model, which is common among the country’s largest tech start-ups and companies.

“If you don’t like [your work], every minute is torture,” he added.

His comment was met with backlash from a netizen with the username stupidcan123, who responded, “Did you ever think about the elderly at home who need care, (or) the children who need company?”

“If all enterprises enforce a 996 schedule, no one will have children.”

Jack Ma said that employees who join Alibaba won’t succeed unless they work those long hours.

“Or why bother joining? We don’t lack those who work eight hours comfortably,” he said.

A netizen named “Yaluo” spoke about the negative effects of the intense work culture.

What do you think of the 996 work model?