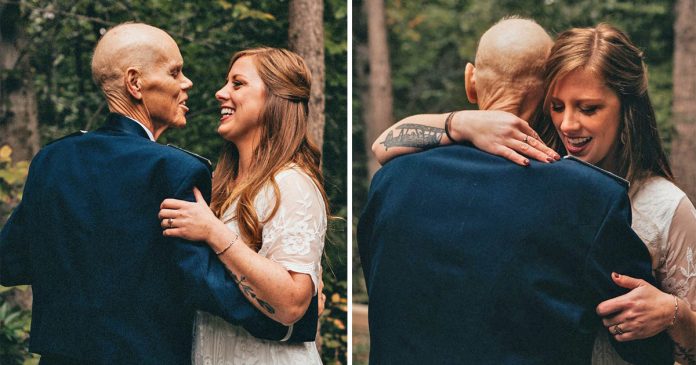 When Becky Carey learned that her terminally ill father would move to hospice care and it was her last chance to take photos with him, she rushed back home instead of doing the engagement photo shoot with her fiancé.

Becky and her future husband, Matt, had originally planned to take engagement photos in a scheduled photo shoot in September 2018.

However, they later found out that Becky’s father, Tim would not be able to attend her wedding, Southern Living reported.

“My dad [Tim] has been fighting prostate cancer and his body is now at the point where it can’t handle more treatment. We found out yesterday that he starts hospice this week,” Becky told photographer Bonnie Turner who was supposed to take their engagement photos.

Becky later requested that the engagement photo shoot changed into a family photo shoot instead.

“Dad is getting weaker by the day, and unfortunately, we have to do this as soon as possible. I wanted to see if you were able and willing to come and take photos at my parent’s house in Woodbridge on this really last-minute request,” Becky wrote to Bonnie.

“We are throwing this plan together really fast because we don’t know how long we have before he won’t be able to.”

For the photo shoot, Becky organized a dance with her father and asked one of her friends to video shoot the dance.

“My dad and I are getting dressed up to film our dance so I can have it at my wedding,” Becky wrote.

For the photo shoot, Becky returned to her childhood home in November last year.

They later use their backyard as the background for the photos.

“It’s not an ideal location, but I know you can make anything look gorgeous,” Becky added.

Bonnie who was moved by Becky’s heartwarming gesture took to Facebook the photos she shot during the father-daughter photo shoot and they quickly received an instant hit among the internet users.

“My heart is heavy today as I have been informed of his passing. He fought so hard for a very long time,” she added. Tim died on March 29.