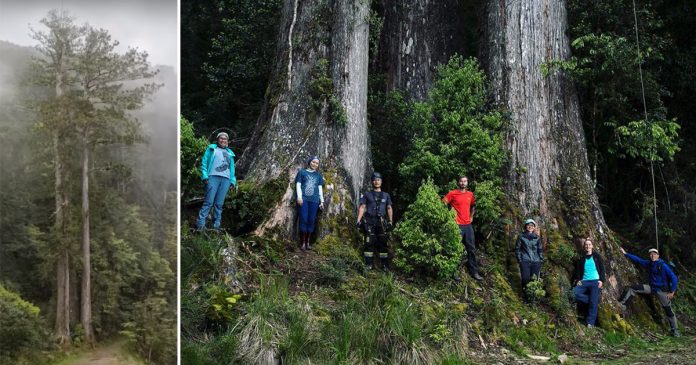 Mother nature never ceases to surprise us and the existence of this tree just adds to that. Taiwanese fir tree reportedly existed on earth for more than 100 million years ago and claimed to be one of the tallest tree species in East Asia.

According to Taiwan’s aboriginals, the Rukai community, the tree was also called as ‘tree that hits the moon’ due to its incredible height. In May 2017, the Australian giant tree record team called The Tree Project came to Qilan Mountain area of Yilan County to film the three neighboring Taiwanese fir trees.

The photographer recorded each height of the tree and combined it into a complete body photo—and it was shocking! The Three Sisters tree was said to be discovered after the ‘September 21’ earthquake in 1999.

According to the botanists, the age of the tree has possibly reached 800 years!

The assistant researcher of the Forestry Laboratory of the Agricultural Committee, Xu Jiajun first witnessed the beauty of the Three Sisters in 2014. He later met Australian ecologist Jennifer Sanger and her photographer husband, Steve Pearce at a seminar in London and invited them to film the tree.

The ecologist Jennifer Sanger and her photographer husband, Steve Pearce.

He invited the couple to film the tree so that the rest of the world can see this amazing diverse ecology of Taiwan.

That was the start of The Tree Projects. Along with a team of professionals, they climbed the top of the Taiwanese fir to capture the height of each tree. The team took a total of 1,200 photos and selected the best 43 out of it. After working for 10 hours a day for three weeks, they finally managed to complete the portrait of the giant tree.

The tree literally reached the sky!

One of the team members at the top of the giant tree.

Amazed by the beauty of Taiwan forest, Pearce believed that the three trees are separated individuals but they turned into supernatural being when combined together.

Watch the video of the tree here: