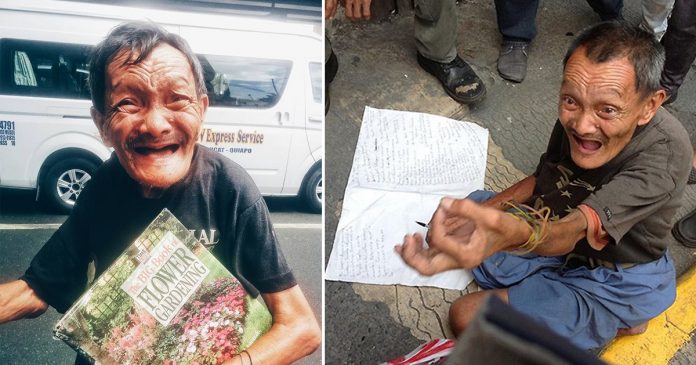 Living on the street, wearing a scruffy t-shirt and scavenging from the garbage is not exactly what many people would think of when it comes to an educated person.

Hence, it was not a surprise when the internet discovered that this man may be more knowledgeable than they initially thought.

Alfredo Manuel is a garbage collector in the Malate-Ermita area who went viral on social media after a student at the University of the Philippines-Manila, Debei Cargando, shared his story on social media.

At first glance, Alfredo may look like a homeless person but he’s not. There is actually more than meets the eye.

The man was actually an education graduate who passed the licensure exam for teachers and the civil service exams.

It began when UP Manila history professor, Benjie Mangubat, interviewed him when his student Debei was busy taking photos of Alfredo.

In his interview, Prof. Mangubat learned that Alfredo once worked as a janitor at an elementary school. However, Alfredo dreamed a better life so he decided to continue his studies.

Years later, Alfredo managed to graduate from the University of the East with an Education degree.

Not long after that, he passed the board exam to become a licensed teacher in 1992 and later on, passed the civil service exams.

Alfredo thought that he was just a step away from turning his dream into reality when he applied to become a teacher at the elementary school where he worked previously. Unfortunately, he later learned that he had pending theft charges at the school.

He knew nothing about the felony and the charges. However, it was not easy to prove his innocence. Alfredo spent the next five years just to prove that he was actually innocent and to have the charges dropped.

Devastated by the news, he lost his will and interest to become a teacher and before he knew it, he began a new life on the streets as he scavenged recyclable materials to be sold to junk shops.

Following him going viral after the interview, many kindhearted people have come forward to offer him books to keep him company. Some people even give food to him.

Alfredo once dreamed a better future when he spent years of studying at the university. Unfortunately, the slander some irresponsible individuals made years ago have cost him his future.