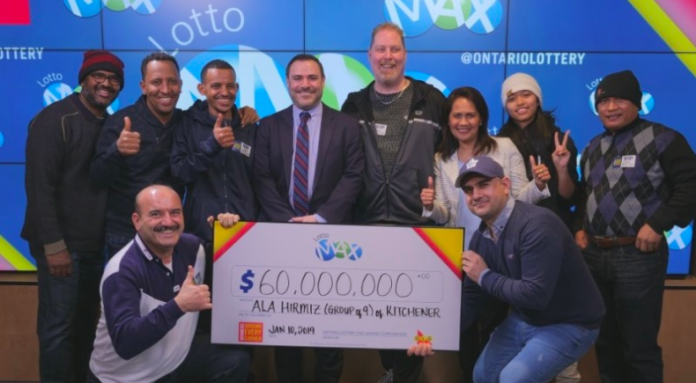 A group of nine employees working at a manufacturing plant in Guelph, Canada have collectively resigned after discovering they won a huge $60 million Lotto Max jackpot.

All of the co-workers who picked up the massive cheque are extremely close as they worked together on the same shift and production line.

They had only started to play the jackpot over the past two months when they received the news which would change their lives forever!

The close-knit colleagues struck gold on Dec. 21, and only found out the following morning when Fernando Meneses scanned their ticket.

“I couldn’t believe it. Imagine—five times I scanned because I wanted to hear that ’60 million, big winner’ it was showing,” Fernando said during a news conference in Toronto on Thursday.

The lucky winners come from all over the world and are aged between 21 and 57.

Eight are immigrants who come from parts of the Middle East, South East Asia, and Africa, and one excited winner said he had only been in the country under a year.

“I’ve been in Canada for less than a year and so far I’ve only known work — I’m excited to explore the country,” Bassam Abdi said.

They all have big plans for the winning money, with dream purchases including vacations, new homes, and vehicles!

One winner, Tariku Birru has always wanted to open Ethiopian restaurant, and Sampath Pathiraja Mudiyansel plans to invest her cash in a coconut plantation in Sri Lanka her home country.

They said they’ve all handed in their notices.

“We are so blessed, happy and thankful,” group leader Ala Hirmiz said.