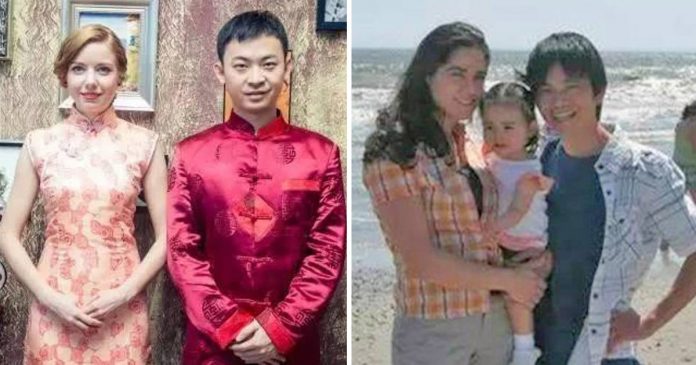 An American teacher and a Chinese farmer falling in love and end up marrying each other may come as an unlikely love story but it is a true story for this romantic couple.

34-year-old Tiffany who is an American first met her husband Cai Xiaohua at an international school in Guangzhou where she works as an English teacher, as reported by Shanghaiist.

Tiffany migrated to China from New Jersey after she graduated and became a teacher at the international school.

That was where she met Cai Xiaohua, 44.

Cai Xiaohua works as a security guard at the school and thanks to his warm smile and friendly nature, the two fast becoming close to each other.

“After graduating from college in America, I came to China alone. When I saw someone smile at me, I thought he must be really friendly,” Tiffany said.

Cai came from a poor family and spent his childhood in rural Henan province with his single father. Her mother left them when he was only 10 years old, leaving Cai’s father to handle the family farm and parenthood alone.

After graduating from middle school, Cai did not further his studies to help his father at their farm. He then moved to Guangzhou where he later met Tiffany.

Even though Cai could not speak English, Tiffany knew some Chinese and that was how they communicated with each other at first.

When Cai’s father found out about their marriage, he felt more than relieved. “Since he was a little boy, my son has been kind and thoughtful. Good people always get rewarded in life,” he said.

After they got married, both Cai and Tiffany quit their jobs and moved to Zhengzhou to be closer to Cai’s family.

Tiffany then managed to secure a job as an English teacher at a local university while Cai has been helping his father with the family farm.

However, that never put a dent on their love. The couple now has a cute 6-year-old daughter.

Two Colombians grow up thinking they are twins—then they see a...