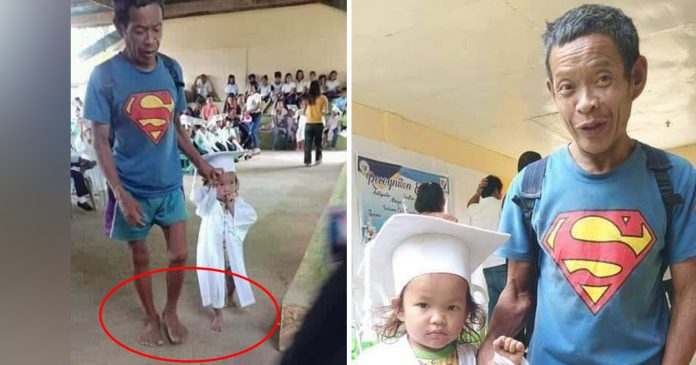 A loving father from the Philippines has captured the internet’s attention after a photo of him walking barefoot to his daughter’s kindergarten graduation made rounds on social media.

In spite of his difficult situation, it did not stop him from attending his daughter’s graduation even if that meant he walk around with no shoes or slippers.

The father along with several other parents are the Mangyans, the Philippine indigenous group living on Mindoro Island.

The father works as a construction worker at La Fortuna, Oriental Mindoro.

In spite of making just enough to survive, he still sent his little daughter to the kindergarten.

Shiela who was also at the ceremony saw the father held his daughter’s hand tight and even walked her to the stage to receive her certificate of completion. Moved by the father’s sacrifice, Shiela then decided to share the photos on her Facebook account.

It did not take long for the post to go viral as many other users were also touched by the father’s action. While everyone else wore their best clothes for the ceremony, the father could only afford to wear a blue Superman t-shirt and a pair of blue shorts.

Both the father and the daughter did not wear any shoes which further shows how poor they are.

While many users touched by the two’s difficult situation, there were many people who were impressed by the father’s willingness to make sure his daughter receives an education.

Even if he could not provide his daughter a life of luxury, he makes sure to give her a better future by sending her to school.

Thanks to the viral post, some people have expressed their desire to help the father and the daughter by sending them some clothes and shoes.