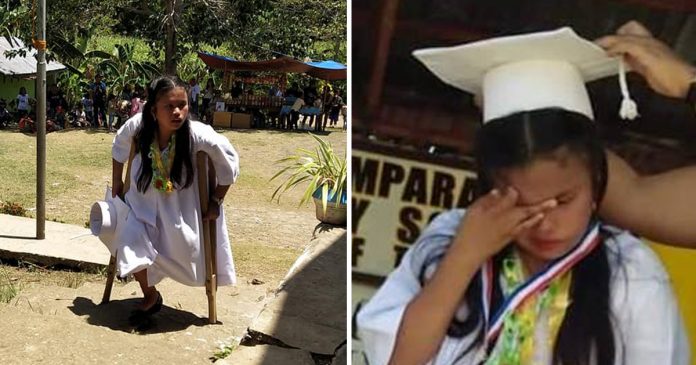 For many students in the Philippines, going to school means crossing the river with no bridge or riding a makeshift boat to cross the straits and channels.

However, unlike other students, Jean has only one leg, proving that it was more challenging for her just to make it to school.

Nevertheless, despite the distance and her disability, Jean showed others how much she strived to go to school.

Her perseverance and tenacity to go to school have inspired thousands of others including the students at her school and also the netizens when her story was shared on Facebook by Junar T Mahilum.

Junar who is Principal 1 at the Department of Education (DepEd) in Toboso, Negros Occidental in the central Philippines shared that Jean received an award for her efforts of going to the school despite her disability when she was in lower form.

According to Junar, he was touched by Jean’s determination to walk to school and went on to finish her 6 years of elementary education at the school.

He added that Jean was willing to do anything it took to finish her studies. However, she hoped that she could have a prosthetic leg one day so that it would be easier for her to go to school.

After Junar’s post went viral on the internet, many users praised Jean’s efforts and admired her for her tenacity.

Even better, some user offered to pay for her prosthetic leg she wanted!

Looks like Jean will have an easier time to walk to school in the future!