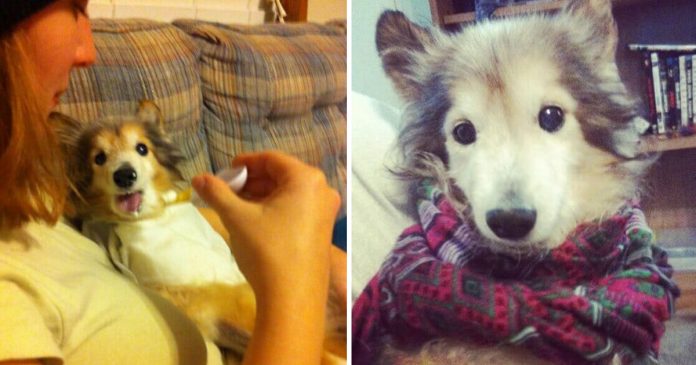 Dogs often earn their reputation as the most loyal companions. It seems that they are not only loyal to their owners but are also able to know when their owners are going through a difficult time.

This is true for Toothless, the stray puppy who has won Cody Leightenheimer’s heart when they first met.

A few years ago, Cody went through a tough time when he and his wife suffered a miscarriage and lost their two unborn children. Following the unfortunate twist of fate, Cody felt that he would never be able to recover from the loss in his life.

Little did he know that a cute puppy would change his heart and his family’s life forever.

Cody who works at a wood flooring factory noticed that a stray puppy was approaching him.

Upon seeing the puppy, he immediately realized that the puppy was not in its best condition.

”He walked up to me and stared at me with his huge eyes”, Cody said.

Malnourished and infested with fleas, the puppy looked at Cody as if asking the man if he could take it home.

Cody took pity and fed the stray before he brought it to the vet. ”We took him to our veterinarian the whole clinic fell for him instantly. The vet had a hard time identifying his breed because of his size,” Cody said.

“They landed on Shetland Sheepdog, an age of somewhere between 8 and 12 with a weigh-in of 7.3 lbs”, he added.

The puppy was later diagnosed with several health conditions.

The vet told Cody that the puppy had only between three months to a year left to live. Heartbroken by the news, Cody then took the puppy home and treated it like his new pet.

Not long after the puppy was adopted by Cody’s family, it underwent surgery on the fistulas and a strict medicinal regiment.

Luckily, the puppy’s health seemed to progress more than they originally thought.

After months of being spoiled as the family’s pet, the puppy named Toothless looked better than ever.

He was a part of his new family and spent a lot of time with Cody as they developed a strong bond together.

”He loved being spoon fed by his mommy, greek yogurt was his favorite treat”, Cody said.

Unfortunately, despite the progress he made, Toothless only made it to a year before he got too sick.

”I watched the greatest friend, most loving pet and the most heroic fighter I’ve ever met sink into a well deserved final nap while his mother and I held his paws”, Cody said.