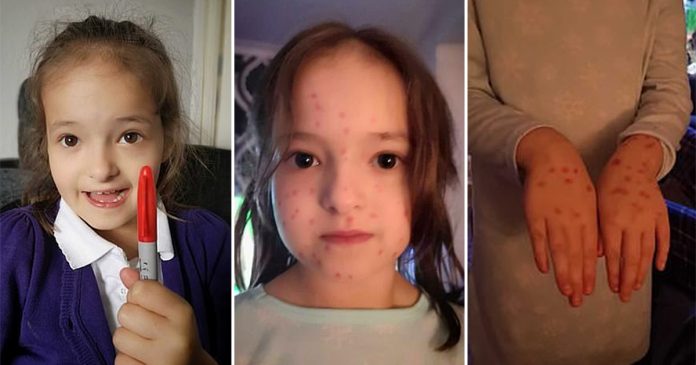 A 6-year-old schoolgirl thought that she crafted the most genius plan to skip school by using a red pen but it turned out that her plan quickly backfired sooner than she realized.

Lily Schooley was definitely not in the mood to attend school as she was not ready to take the spelling test that day.

After seeing some of her friends were absent from school due to illness, Lily thought that she could use the same excuse to skip school.

“A few of the children in school had come down with chicken pox and she’s had it before so she knows she stayed off school for a while,” Lily’s mother, Charlotte Schooley said.

The little girl then borrowed a red Sharpie pen and told that it was for her homework.

10 minutes later, Lily ran downstairs and claimed that she had caught chicken pox.

Luckily for her parents, they saw what their mischievous daughter was up to. Her parents had a hard time to stifle their laughter and later tried to trick her into confessing when they threatened to take her to the doctor.

“Me and my husband were aching with laughter, trying not to let on that we knew.”

Like any other youngsters, Lily was not really fond of trips to the doctor so she quickly tried to scrub off the red dots she drew all over her body.

Unfortunately, the red spots did not come off.

Apparently, Lily did not know that the red pen she used to draw the spots was a permanent marker!

The girl even tried to wash the spots off with soap, oil, body wash and even hairspray but they just did not come off.

However, the lesson did not stop there. The next day, Lily still had to go to school and had to convince her friends that her red spots were not contagious.

“She had PE that day as well and had to wear shorts and t-shirts. The teachers thought it was hilarious,” Charlotte said.

Luckily for Lily, the incident happened on a Thursday night so that meant she only had to go to school with the red spots for just one day.

Even though the incident was quite embarrassing for the little girl, Charlotte believed that the little trick was not going to be the last that Lily tried to pull off.