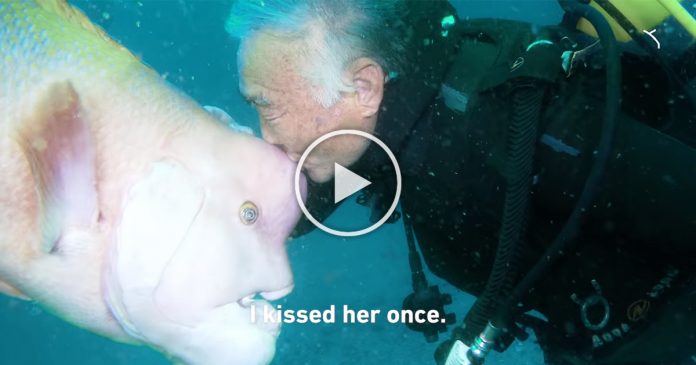 This elderly Japanese scuba diver with 60 years of diving experience could be the real-life Aquaman as he is actually friends with the fishes!

For the past 30 years, this 79-year-old elderly called Hiroyuki Arakawa has been assigned to oversee one of the religion’s shrines of Shinto called tori hich which is located under the surface of Japan’s Tateyama Bay and he has been friends with a particular fish ever since.

Over the decades, he got to know the marine creatures living around the shrine and became friendly with an Asian Sheepshead Wrasse named Yoriko.

Every time they met, Arakawa will greet Yoriko with a kiss.

Arakawa met Yoriko around 30 years ago as it lives by the shrine’s gate. It all started when Arakawa rescued the badly injured Yoriko and fed the fish about five crabs every day for 10 days.

Arakawa believed that he is able to touch and interact with Yoriko because there is a sense of trust between them.

Yoriko probably still remembers that Arakawa saved her long ago.

As recently shown from a scientific study, fish can actually recognize a human face.

“Two images of human faces were presented to fish by scientists and the fish were trained to choose one by spitting their jet at the picture. The researchers choose to make things a little difficult. They made the picture black and white and the head shapes were evened out. You would be of the thought that would throw the fish for a loop. But no. they were able to pick the face they were familiar with and with more accuracy-86%!” Dr. Cait Newport from the University of Oxford told CNN.

Hence, there’s a huge possibility that Yoriko is actually friends with Arakawa because it recognizes his face.

Such a special relationship!

A Very Sick Puppy Who Was Dumped in the Trash By...