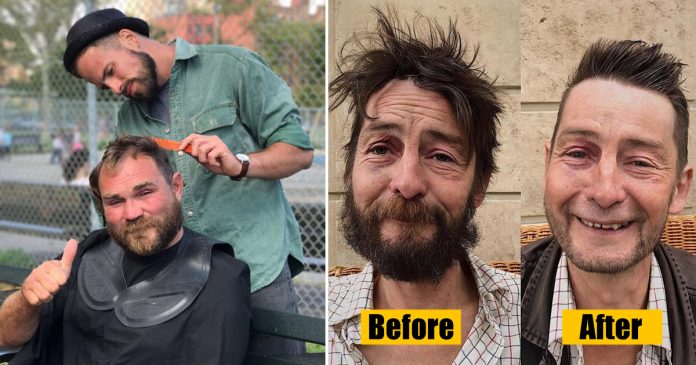 London hairdresser Joshua Coombes has been giving free haircuts to homeless people for years and it is not only about giving them fresh trimmings—it is about compassion and humanity.

During his days off, the 31-year-old hairdresser will come to the streets with his scissors to give those who live on the streets a new look.

However, Joshua does not only offer free cutting service. He also lends them an ear as he listens to their stories, thoughts, and feelings.

In his effort to raise compassion and awareness among the public about the homeless people, Joshua later posts his encounters on his Instagram account.

His mission is to tell the world that homeless people are humans just like everyone else. Like all of us, they, too, have a story that led them to where they are now.

The movement as Joshua called ‘Do Something For Nothing’ tells people that there is no differences and bounds when it comes to humanity and that a moment of compassion can go a long way than we thought.

A post shared by #DoSomethingForNothing (@dosomethingfornothing) on Nov 15, 2016 at 12:20pm PST

The hairdresser also said it was not just about giving them free trimmings but the time he spends chatting with them who are often ignored by the larger part of the society.

Speaking to UNILAD, Joshua said, “These are people who I see myself in, and as I started to tell these stories to others I realized how much it impacted, and how many people wanted to know more about the people I was meeting.”

“They’re the moments that are most important to all of us really, at the end of the day they’re what we share with one another.”

To him, every encounter and service he offers is meaningful.

“Some people I go back and visit, and sometimes I just meet them that one time, but for me each of those is as important as the other, whether it ends with big smiles or just a nod of appreciation.”

Joshua added that he believed that a lot of people are caring about the homeless community but are not sure about how to help them.

“A lot of people are compassionate towards homelessness, but it’s all about how we can make the idea more accessible to everyone.”

As the movement grew bigger, Joshua later traveled to Los Angeles with his friend Jamie who is an artist.

There, he teamed up with Jamie; he gave haircuts and Jamie would take photos of those who they spent time with.

They then rented a gallery space and displayed the portraits of the people in a show called ‘Light and Noise’.

“It was called Light and Noise because we believe we can all shine a light and make some noise. Even if we don’t know the solution I think it’s okay to be an amplifier,” Joshua said.

“We try to give isolated people more importance.”

Apparently, the show was so successful that Joshua later organized four more ‘Light and Noise’ events in Manchester, Amsterdam, Paris and Berlin and partnered with TOMS.

‘Do Something For Nothing’ has proven to be incredibly meaningful and successful as it delivers a powerful message; that there is more than meets the eye when it comes to the people who live on the streets.

Check out Joshua’s Instagram page for his weekly updates about the movement.