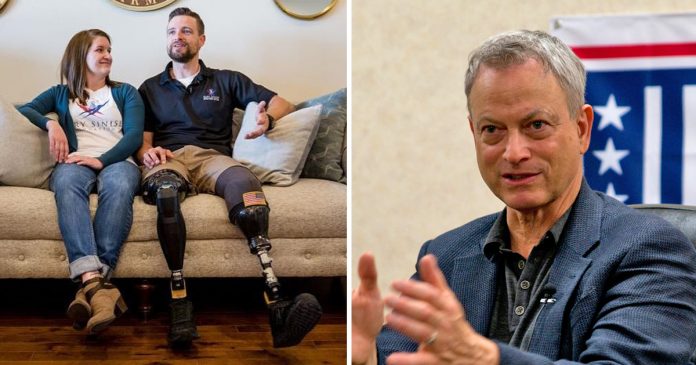 Gary Sinise has done it again! The actor is making the world a better place with his countless kindhearted gestures and has just given a Smart Home to a former Green Beret who lost both of his legs in Afghanistan.

The 64-year-old has long spoken out in favor of support networks for veterans and soldiers, and his kindness makes him stand out as one of the nicest and most genuine men in Hollywood.

When ex-Green Beret Sergeant Caleb Brewer from Tucson, Arizona, lost both his legs from injuries in Afghanistan, he had almost lost all hope.

When he got home, he didn’t know how he could go on with life.

That’s until he met Gary Sinise, who turned his life around for the better!

On top of losing his legs, he had a traumatic brain injury and suffered infections and blood clots.

Luckily he survived, and retired in 2016.

The 31-year-old had a lot of trouble returning to ‘normal’ life, and suddenly, every task proved to be a hurdle.

That’s where Gary Sinise comes in—when he heard about Caleb’s trouble, he decided to make sure he would never have to worry about suitable housing.

He persuaded Caleb to apply to the RISE—Restoring Independence Supporting Empowerment—program through the Gary Sinise Foundation. It supports injured veterans by building smart homes and vehicles which are specially adapted to their needs!

Caleb was soon approved and his modified home was completed on February 6!

The home has smartphone-controlled functions including being able to see who’s at the door, opening and closing the blinds, adjusting the stereo volume, tilted mirrors, along with other features.

“It’s incredibly overwhelming in a good way. It doesn’t feel real. I never would’ve expected it in a million years,” Caleb said.

Check out the house in the video below:

Gary Sinise is doing all he can to make the world a better place, well done!

Scary moment when toddler suddenly falls into pool without anyone realizing—astonishingly...