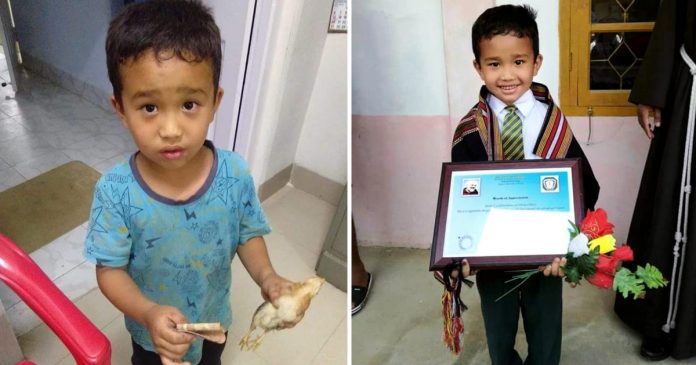 A six-year-old boy from Mirzoram, India, has melted the internet’s heart after he was photographed at a hospital clutching a chicken he accidentally ran over with his bicycle.

The little boy, Derek C Lalchhanhima, was so upset that he had hurt the chick, so grabbed all the money he had—10 rupees—and brought it to a nearby hospital looking for help.

A photo of Derek looking extremely worried and upset has since gone viral on Facebook.

“As per Reports: This young boy from Sairang, Mizoram, accidentally ran over his neighbor’s chicken.

“He took the chicken, ran to a nearby hospital and with all the money he had, asked for help. (I’m laughing and crying all at the same time),” Sanga Says posted on Facebook.

Aww, just look at his face!

“According to the father, the boy came home with the neighbor’s chick that he had accidentally killed,” Sanga told NDTV.

Derek returned home crying, and even took out a 100-rupee note saying he wanted to save the chicken.

He didn’t even know that the chicken was dead, so his dad had to explain it to him.

“He did not understand that the chick is dead and begged his parents to take it to the hospital. His father told him to go himself, which he did with ten rupees,” Sanga explained.

His heartwarming gesture of wanting to save the chicken impressed many people, who say he has such a pure heart.

He has even been awarded by his school!

“I guess by now you all know who this adorable kid is,” Sanga shared on Facebook.

“Derek C Lalchhanhima (age 6) is being honored by his school and he is draped in a shawl which is a traditional way of honoring someone among Mizos.

“In Mizo tradition different types of shawls are usually presented to esteemed guests and in olden days, to pasalțha (braves or warriors) who have accomplished great feats.

“The shawl that is draped on him looks like a modified version of the “Tawlhloh Puan”, an honour given to those who have exemplified extraordinary courage,” he added.

So adorable! We hope Derek feels better about the accident now!