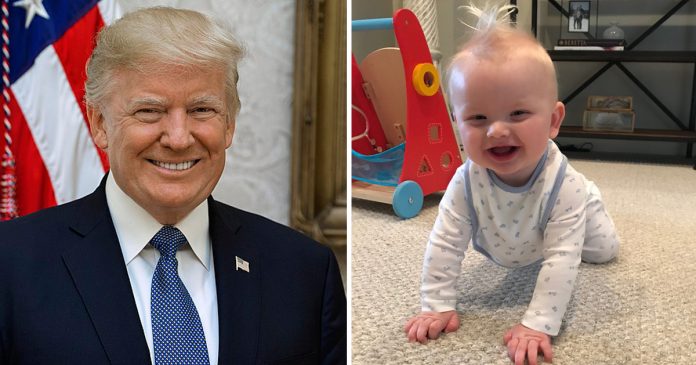 Baby Luke Trump, President Donald Trump’s youngest grandson may be only 18 months old but the toddler has already melted millions of hearts with his adorable smile and great styles!

Born to parents Lara and Eric Trump in September 2017, Luke has been a favorite presence on Instagram thanks to his lovely photos.

Eric, 33, first announced Baby Luke’s birth on Twitter as he wrote a caption that read, “[Lara] and I are excited to announce the birth of our son, Eric “Luke” Trump at 8:50 this morning.

Along with the joyous announcement was a photo of newborn Luke in a cap and stripy blanket.

.@LaraLeaTrump and I are excited to announce the birth of our son, Eric "Luke" Trump at 8:50 this morning. pic.twitter.com/b8zRSktcd8

Lara and Eric Trump have been married since 2014. Lara, 36, who also works as an associate producer for television news program “Inside Edition” makes it clear that she enjoys being a doting mother to Baby Luke.

Her Instagram has been filled with Luke’s photos since his birth, from when Luke was just a tiny newborn to a healthy, bouncing toddler.

One particular photo that stands out shows Luke enjoying his time playing on the slide at a playground with Lara laughing joyfully, ready to catch him.

Apart from his totally cute smile and his surname, it is not easy to miss that Luke is a Trump legacy thanks to his blonde hair which resembles very much like his famous grandfather.

Proud father Eric himself admitted that the idiosyncratic hairdo runs in the Trump family.

Eric himself was born with the Trump signature blonde hair.

“It was bleach blonde,” he shared. “[Luke] takes after me in that way.”

Check out more photos of Luke on his parents Instagram.