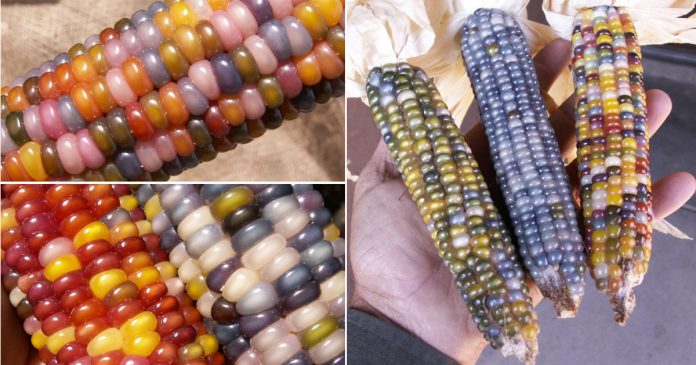 This incredibly stunning hybrid of corn is called Glass Gem corn and it looks more like a beautiful piece of jewelry rather than a vegetable. They are 100 percent real and natural.

Available in blue, green, red, purple and many more colors, this corn definitely does not look like the ones you usually see on the supermarket’s shelves.

Glass Gem corns are the result of heirloom-style farming, as well as selective planting, started in Oklahoma by a creative farmer named Carl Barnes.

Barnes who is half Cherokee Native American began growing the colorful varieties of corn as a way to reconnect to his heritage.

It took him a while to create the gorgeous Glass Gem corns as he needed to isolate heirloom corn seeds and exchange or share the seeds with other people across the country in search for more colorful varieties.

That was how these extraordinary corns come by.

Later, a company that sells rare seeds, Native Seeds/SEARCH began ramping up the production of the seeds of Glass Gem corns after the corns became a sensation worldwide in 2012.

They also sell the seeds online so if you ever think of growing your own Glass Gem corns, you can get some from their website.

While the Glass Gem corns are edible, they are not quite as sweet as the regular corn and sorry to disappoint but they no longer possess the colors after being “popped”.

This beautiful variety is flint corn which means that it is most suitable to be processed as flour or popcorn.

However, when dried, these Glass Gem corns are no longer rainbow-colored. Hence, why it is mostly planted for decorative purposes.

Glass Gem Corn pops! It is a popcorn, not a sweet corn. Sorry to dissapoint – the popcorn will not be gem colored. The…