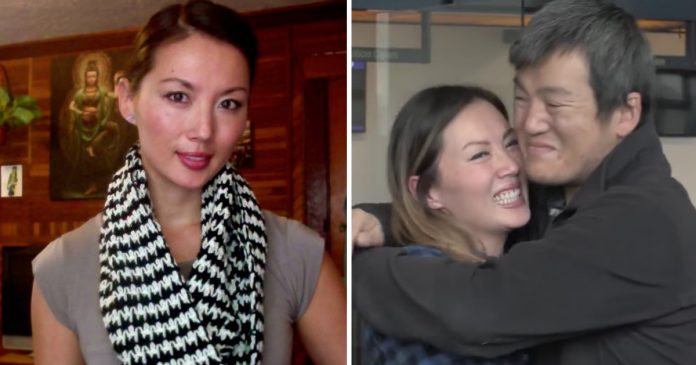 Renee Alanko could still recall the day when she was abandoned by her biological father at a marketplace in Seoul. She was only a 4-year-old girl at that time.

He then told her to buy herself a treat but when she returned, her father was nowhere to be seen.

Luckily, a concerned woman approached Alanko where she later found a note inside Alanko’s pocket which read, ” Please send this child to an orphanage through police station. At present, she has no parents.”

Even though she was only 4 years old when she was found, Alanko could still remember telling the police that her real name was Lee Jee Young Lee.

Meanwhile, her father’s name was Lee Kyung Kuk and that she had an older sister named Lee Sang Yeon.

Her mother ran away from home because her father often beat her when he was drunk.

That was some of the earliest memories that Alanko has when it comes to her biological family. She vaguely remembered that she actually had another sibling, a younger brother.

Apparently, her younger brother was also abandoned by her father outside the Yongsan theatre. He was around two years old at the time.

Not long after she was rescued, Alanko was adopted by a family in Northern California while her little brother was adopted and given a new name, Hong Ki Hong by the man who rescued him, Mr. Hong.

Nearly four decades later, Alanko embarked on a journey to search for her biological family.

Following a DNA test through 23andMe, Alanko found out that she was related to Justin Kragt, of Salem, Oregon.

Via 23 and me, I found the little brother that I spoke about missing when i first came to the US after being adopted…

Alanki then reached out to Kragt on Facebook and needless to say, the two were overwhelmed with emotion when they were reunited.

“It’s kind of you’re happy, you’re sad, you’re excited, you’re shocked, you don’t know what to do,” said Kragt. All these years, he thought that he was left on his own because of his congenital heart failure.

After 34 years of being separated, Alanko and Kragt finally met each other again in a heartwarming reunion.

Even though they did not grow up together, they both felt a sense of familiarity when they saw each other.

“It felt completely like I knew him,” Alanko said.

Kragt had a difficult childhood; he was abused by his adopted father and knowing that he now has a family member that he can rely on soothes his wounded heart.

“I always thought I was alone in the world, and I was content with that,” Kragt said.

“Now you’re stuck with me,” Alanko replied to Kragt while hugging her younger brother.

Both Alanko and Kragt may never get to know how their biological parents look like nor will they ever get to know why their father abandoned them years ago. Nevertheless, the two were grateful that they got to get reunited with each other.

“It’s something that I’m going to treasure the rest of my life,” Kragt said.

Man buys 2 bags of guavas from old woman by the...