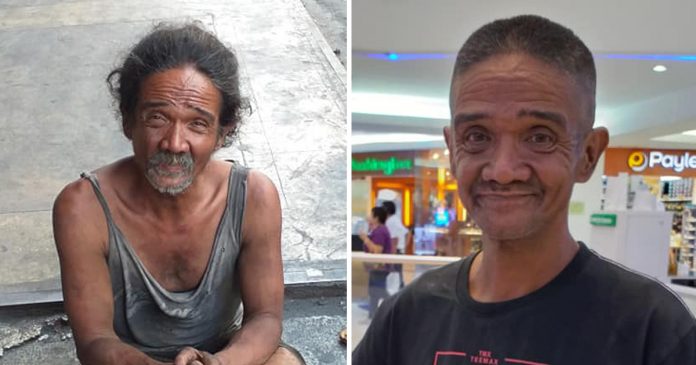 One homeless man’s life took a dramatic change after a kind-hearted pastor saw him scavenging for food in a garbage bin.

Franklin Goden first saw the homeless man, Erwin Dean, when he was passing a shopping mall in Quezon City.

It did not take him long before he decided to show Dean some gesture of kindness later on.

Goden who works as a pastor then bought Dean new clothes and took him to get a bath.

He even treated Dean to a new haircut.

Next, he treated Dean to a delicious meal at McDonald’s at a nearby shopping mall.

He later shared his day with Dean on Facebook where the post quickly made rounds on the internet as people were touched by his compassion and moving action.

However, there were some people who criticized the pastor for publicizing his good deeds on social media.

Nevertheless, Goden replied that it was never his intention to seek popularity and praises.

In response to the criticism, Goden said that he posted Dean’s photos on Facebook in hope for his long lost family to reach out and help the homeless man.

According to Goden, Dean’s brother had reached out to him after the post went viral.

Thanks to Goden, Dean now no longer has to sleep on the street and scavenge for food. He even got to reunite with his family!

What a difference a small act of kindness can bring to the ones in need. Goden and Dean’s story reminds us that good deeds even something as small as offering some food can be a huge blessing to someone.

So, the next time you see someone in need of help, do not be afraid to offer them some help. Who knows that you will change their lives for the better!