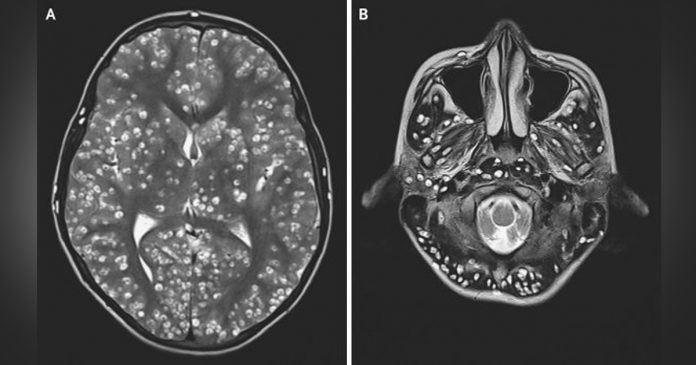 A teenager has died after hundreds of larvae from a tapeworm buried in his brain, leaving him unconscious. The larvae are often picked up from eating undercooked pork!

The 18-year-old from India was rushed to ESIC Hospital in Faridabad after suffering seizures, doctors said.

And MRI scans featured in the New England Journal of Medicine show white specks dotted around his brain, indicating where the cysts had formed.

He had pain in his groin, was in a confused state, and had a swollen right eye, caused by further cysts in those areas!

A Taenia solium infection can go undetected for years, making it extremely dangerous. It also absorbs the nutrients in your gut.

The tapeworm can also spread to other areas of your body by producing eggs. They can then damage tissues and form cysts—a disease known as cysticercosis.

It can even cause epileptic fits if cysts called neurocysticercosis form in your brain.

While anti-parasitic medicines are usually used to treat the infections, doctors feared the 18-year-old had so many cysts that the medicine could worsen his inflammation and swelling.

Doctors tried to save him with dexamethasone and antiepileptic medications, but sadly, he died two weeks later.

Tapeworm infections are the leading “preventable” cause of epilepsy in the developing world, according to the World Health Organisation (WHO).

The infections also come from fish, such as raw salmon, which is known to contain the parasitic larvae.

However, cooking the fish kills the larvae completely.