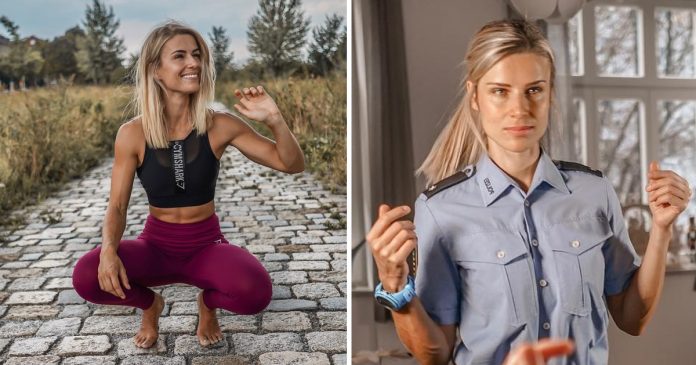 If you were asked to choose between modeling and being a police officer, which one would you pick? For Adrienne Koleszar, she chose to be the latter.

Dubbed as “Germany’s Most Beautiful Policewoman”, Adrienne who also does modeling with nearly 700,000 followers on her Instagram account is a full-time policewoman.

Adrienne went on a sabbatical leave from her police work last July to focus on her modeling career.

During the leave, Adrienne traveled across Germany and also several other countries around the world like Cape Town, Miami, New York, Dubai and Amsterdam.

Everything on her trip itineraries was sponsored as a popular Instagram influencer. Adrienne then went on with her modeling career for six months.

While her modeling career was flourishing, her superiors were not exactly happy about her photos posing in bikinis made rounds on social media.

Apparently, they believed that her modeling career was not entirely appropriate and aligned with the image of a police officer.

Adrienne later was made to choose between being a model or a police officer as she had to decide whether or not to continue her sabbatical leave or return to her job as police on January 1.

Adrienne admitted that she enjoys being a model as she gets to have fun during photo shoots and travel around the world.

However, she said that she also loves being a police officer.

“Of course, I had to consider whether I would go back on January 1 and whether I wanted to. That’s a decision I had to make for myself because it’s no secret that the half-year was a time I thought about where I’m going.”

“Am I happy with what I’m doing at the moment? Am I unhappy and do I need to change anything? It wasn’t really any more than that,” Adrienne wrote.

After weighing the pros and cons of both jobs, Adrienne later revealed that she decided to return to her job as a police officer.

Many of her fans were surprised by her decision but they respected her choice and praised her for choosing the noble profession, especially during the time that not many people are keen to join the police force in her hometown.

“I’m very happy that you want to stay a policewoman! The most beautiful profession in the world, as hard as it sometimes is,” one of her fans commented.

It may have been hard for Adrienne to make a decision but we believe that she has made a great decision.

Woman battling breast cancer says ‘I do’ before leaving her husband...