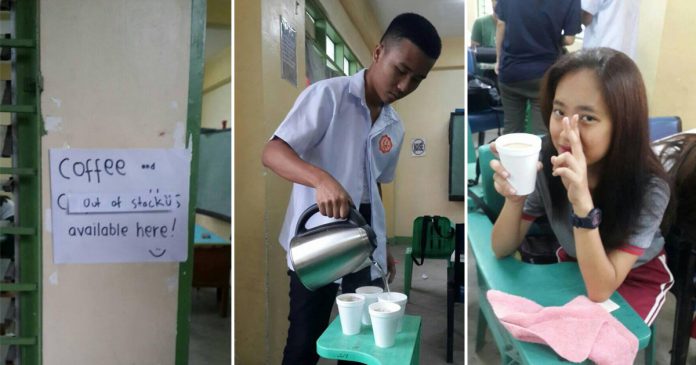 In many cases in the Philippines, students have to drop out of school due to poverty but one student has been determined to not let it stop him from going to the school.

Aldreen Pelobello Siplon is truly inspired by the determination shown by one of his classmates who tries his best to pay for his school fees by selling coffee to the class.

Paulo’s business is really simple. All he needs is a big thermos filled with hot water, a couple of styrofoam cups and coffee sachets.

Whenever his classmates feel the need to freshen up after a long lesson, Paulo will make them a cup of hot coffee for a small profit.

Not only that Paulo is able to earn some money through his creative venture, he also somehow helps his classmates to stay awake and focus throughout the class!

Paulo also seems to be able to attract ‘customers’ from other classes as seen by the “Out of stock” sign he placed outside of his classroom.

Apparently, Siplon admires his classmate for thinking out of the box to help him pay the school fees.

He later shared the story and photos of Paulo on his Facebook account and when his post made rounds on the internet, many people praised Paulo for his effort to earn some money instead of giving up.

Some people also commented that Paulo will have a bright future given his determination and attitude to see the brighter side of his current situation.

Paulo may have to work a little harder to pay for his school fees at the moment but we believe that he will be successful in the future if he continues with this mindset!

People make fun of father running with empty stroller—but his 4...