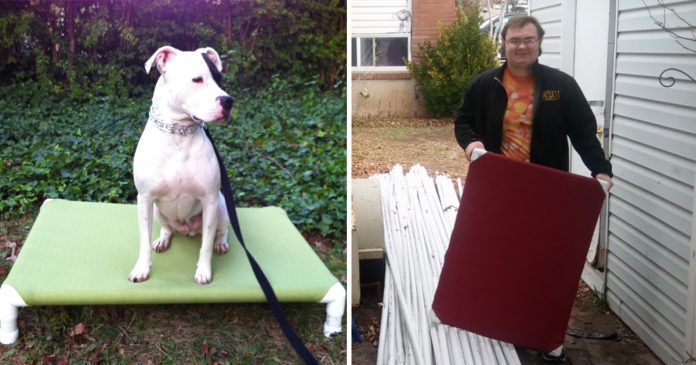 17-year-old Chance Call has always loved the idea of helping animals in need with his town’s Eagle Scout program in Utah.

It started off when he collected blankets to donate to local animal shelters but later, the idea morphed into something bigger.

Chance learned that while donated blankets were very useful to the animal shelters, sometimes there was not enough money and resources for every animal to stay comfortably in the shelters.

That sometimes led the animals having to sleep on the cold, hard floors.

When Chance learned about the heartbreaking fact, he knew he had to provide more than just donated blankets.

He then realized that he could make a comfortable dog bed by using PVC pipes.

“I’ve always loved animals, I know shelters do their best, but sometimes it isn’t enough,” Call said. “I heard about PVC dog beds and I decided to do some research.”

Later, he contacted hundreds of donors, volunteers, and vendors to raise enough funds for his charity project to build 150 dog beds from scratch.

The teen’s original goal was to raise $2,500 for his project but soon, donations started pouring in more than he expected.

“I had no idea what to expect when I asked for the money. Everyone told me to plan for less than I wanted. My original goal was $2,500. I had the opposite problem, I received a little more than $3,500.”

Thanks to the funds and the help he received from the volunteers, Chance managed to build all the 150 dog beds.

He plans to donate and send the dog beds to the Davis County Animal Shelter on April 1.

Check out a DIY tutorial on how to make one:

Man who abandoned mother dog and her newborn puppies in front...