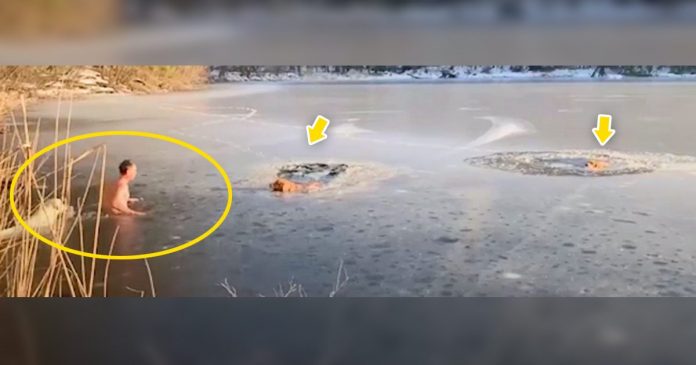 This is the heroic moment a man and his pet dog jumped into a frozen reservoir to rescue two dogs that had fallen through the ice.

Yonkers resident Timofey Yuriev was strolling around Irvington Reservoir with his wife and their dog when they suddenly heard a woman screaming.

“First we heard the screaming, the woman was screaming for her dogs… and then we saw two dogs crossing the lake,” Yuriev told NBC 4.

At the time when they spotted the two dogs, the canines were paddling in place but they slowly looked quite exhausted.

“I was looking at them and I realized, alright, so… the rescuer, they will come maybe in 10, 15 minutes. The dogs might have hypothermia,” he said.

Yuriev knew that the dog would soon give up paddling before the rescuers arrived so he later decided to jump into the icy water to rescue the dogs.

Luckily, Yuriev was used to cold as he once lived in Siberia. “Because of my past, I used to live in Siberia – my grandfather, a hunter, he taught me how to stand cold, and how to prepare yourself,” he said.

The man’s golden retriever Kira also followed him and helped with the rescue.

Thankfully, the heroic duo managed to rescue both of the fallen dogs successfully.

Luckily, Yuriev’s wife, Melissa Kho captured the amazing moment her husband rescued the dogs in the frozen reservoir on camera.

“Just witnessed something amazing: My hubby (and pup) rescuing two dogs trapped in the ice,” Kho wrote on her Facebook post.

The video shows Yuriev and Kira breaking the ice as they moved closer to the dogs and brought the first dog back to the shore.

The duo then returned to the second dog that was stuck paddling in the water quite further away from the shore before Yuriev swims out to reach it.

The video has since quickly gained attention on social media as many people praised the man and his dog for rescuing the stranded dogs in the cold weather.

Watch the moment Yuriev swims out in the frozen reservoir to rescue the stranded dogs here and shared his secret technique on how to keep warm in icy water: