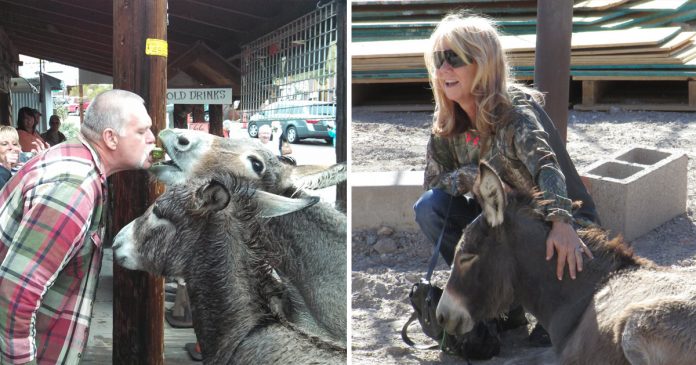 Do not be surprised if you are greeted by donkeys when you happen to be driving in the ghost town of Oatman!

The town was named after Olive Oatman, a young girl who was kidnapped by an Indian tribe and was later rescued. It was a lively town during the gold rush but now, the town has been abandoned after the gold mines dried up.

Apart from its former reputation as a booming gold mining area, Oatman is also famous for its burros, an old Spanish term for donkeys.

In the town, donkeys can be found walking on the streets pretty much everywhere.

These burros are the offsprings of the burros which were transported to the town back in 1800s. At that period, burros were used to carry loads and transport essential supplies.

As the gold rush era came to an end and gold miners no longer needed them, these burros were let loose to roam the streets in Oatman.

When the population of the town declined over the decades and as locals gradually moved to other towns, the town becomes a ghost town filled with restaurants and souvenir shops which cater to tourists.

The Oatman Hotel which was built in 1902 is one of the popular tourist attractions which has seen Hollywood actors with the likes of Clark Gable and Carol Lombard staying at the hotel for their honeymoon.

In spite of the many popular landmarks in the town, the burros remained as the top attraction for everyone who stops in the town.

These burros are more than friendly to take photos with tourists in exchange for some food.

They are maintained and protected by the United States Department of the Interior and they are also regularly fed by the shop owners.

Nevertheless, beware of older burros if you are carrying food on you. They would not mind chasing you down the road if they want to get your food!